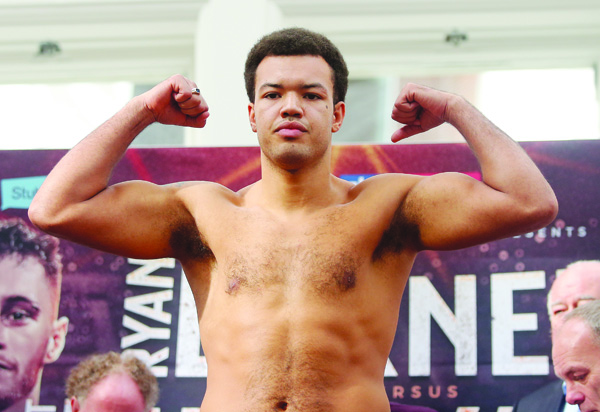 TOMMY McCarthy will be aiming to make it two wins in four weeks when he faces Blaise Mendouo (4-7) on Saturday night at the SSE Arena.
The Lenadoon cruiserweight was a first round winner over Peter Hegyes in what was his first fight in 11 months, so to get back out so soon and try to build momentum ahead of what he hopes will be a big 2018 is most welcome.
“It’s great, especially coming off such a long hiatus and to get on the two biggest shows in the country back-to-back is great,” he said.
“We’ve done a lot of work in the gym in the weeks since I was last out. I was back over in England after the last one and I have just been getting fitter and sharper, sparring even better than what I was before the Burnett show, so I’m really looking forward to this Frampton one.”
Getting some rounds in the bank following his long layoff would be a positive for McCarthy, but he says he would be happy with another early win.
Just being back in the ring after a frustrating 11 months is where he wants to be as he looks to build back towards the British title mix.
“I’m happy to get another first round win, but just getting the win is the main thing and to look good doing it,” he agreed.
“I don’t mind what way it comes, I just want a good clean-cut win.
“The two fights in quick succession just gets me back in the public eye again because I had people asking me if I was still boxing.
“Tyrone (McKenna) is my best mate and I’m always with him, so any time we were going anywhere people would ask when he was fighting and he always had news and I didn’t, so it’s just good to tell people I have dates and that I’m training with a date in mind and with a purpose.”
McCarthy and his fellow Belfast boxers form a tight-knit unit, something that is quite unique to this city given the solo nature of the sport.
He explained that their years spent on the amateur circuit helped develop that bond as they look to drive each other on.
“All my mates are on this show,” he continued.
“Paddy Barnes is a good mate, Jamie Conlan and Carl are mates. On the last one, Tyrone McKenna was boxing on it and he’s my best mate.
“We’re all mates and all knew each other growing up. We all got to know each other from boxing on different teams and going away together, so everybody knows each other pretty well and that’s why there is so much camaraderie.
“It’s different between England and here because I notice over there a lot try to go pro without even boxing as an amateur so they don’t even know each other.
“Here, people only go pro if they have had some sort of success as an amateur.”
That amateur success is beginning to translate into professional glory with Carl Frampton and Ryan Burnett leading the way in recent years.
Jamie Conlan can join them as a recent world champion and McCarthy hopes he can join the party in the future.
“Carl got the ball rolling by winning the world titles. Now Burnett has done it, Jamie will do it this weekend,” he added.
“That’s two North Belfast ones (as world champions) so it’s starting to creep into West Belfast now.
“They work hard and show that you’re able to achieve your goals.
“Sometimes in your local area and you say you want to be a world champion, people would tell you to wise-up and that it’s impossible to do. The likes of Frampton, Burnett and Jamie Conlan are showing us that it’s not impossible as they are doing it.”
First, he hopes to make a dent at domestic level, but his loss to Matty Askin in a British title eliminator last year set him back although he is hopeful another win on Saturday can get him back in the frame.
“I think I’m a wee bit behind,” he admits.
“(Stephen) Simmons is ahead of me in the pecking order for the British title so I would hope to get some sort of title in the meantime while I wait for the British title, but I want to be fighting for major titles in the new year.”