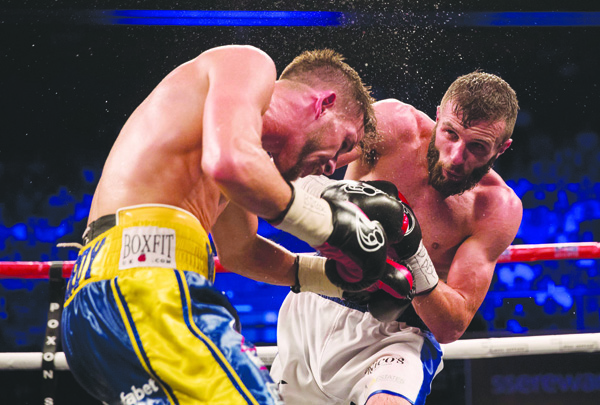 HAVING had to endure two postponements, Anthony Cacace will finally get the chance to challenge Sam Bowen for the British super-featherweight title at the Birmingham Arena this Saturday night (live on BT Sport).

The Lenadoon southpaw saw fights against Bowen fall through twice already this year including slot on the Michael Conlan v Diego Ruiz card at the Falls Park and he admitted he thought he would never get to challenge the Englishman and questioned his own future in the sport.

It was just the latest chapter in a frustrating career that has been more stop than start with huge gaps between fights.

Indeed, since a disputed loss against Martin J Ward for the British and Commonwealth titles in July 2017, Cacace has boxed just twice: a routing points win over Reynaldo Mora in December of that year before enduring 15 months of inactivity before returning with a points victory against Alan Castillo in February this year.

Part of the reason is that without a title, Cacace has been avoided given the threat he poses, but now he can finally get the chance to grab the Lonsdale Belt and get his career firmly on track.

“I’m just happy to be getting a fight to be honest,” he said as he finished up camp last week.

“As this stage, I just want a fight and a payday because I’ve put a lot of graft into this.

“Once he pulled out for the second time, I honestly didn’t think it would ever happen.

“I just pulled out of boxing altogether because I’ve a family and I’ve kids, so I need to do something for them as well.

“I was just thinking ‘where do I go from here or will this happen?’ because I thought once I got myself into the mandatory spot, it was a cert (to happen). Now it is happening I just have to be thankful and hope for the best.”

His former Holy Trinity amateur coach, Harry Hawkins, is now the man in his corner and Cacace is grateful to have a coach with world title experience there for what is a do-or-die assignment this weekend.

It is far from a straightforward task against the 27 year-old champion who has a perfect 15-fight record with 11 of those wins coming inside the distance.

Bowen picked up the title against Maxi Hughes in April 2018 before picking the WBO Inter-Continental strap six months later against Horacio Cabral.

His last outing was a defence of the British title against Jordan McCorry in March and Bowen got the job doe in the ninth after wearing down the Scot.

His relentless, aggressive style will test the engine of Cacace as Bowen’s stoppages come more from an accumulation rather than single shots, with none-stop pressure, but the flip side is that he is there to be hit and Cacace carries huge power in his left hand to make the champion think twice.

“I have a game-plan to make sure it’s not gruelling,” insists the 30 year-old West Belfast man who holds a 17-1 record.

“He comes at you with a ferocious pace, but can he keep coming if you keep hitting him hard? The plan is to box him and force him into mistakes.

“I know I won’t have to go looking for him because he keeps coming. It’s all about staying calm and working behind that jab, not getting complacent and work inside with him because that’s the wrong thing to do.”

That defeat to Ward for the title over two years ago was a lesson learnt for ‘The Apache’ as while he connected with the better punches and was defensively solid, the judges opted for the champion and away from home, Cacace insists he can’t leave it up to the cards this time.

He undoubtedly has the power to get the stoppage he feels he will need and while not going in with a gung-ho approach, taking the decision out of the hands of the judges is what he is targeting.

He will get his opportunities and should he find a home for those huge left hooks, then he can get the win his talent deserves and push onto bigger things.

“I’m going there with a ‘this is it’ attitude. I’ve never been in gruelling 12-rounders, but anyone who has stood in front of me and tied to box like Ronnie Clark – I knock them out so I’m hoping for the same result.

“I don’t think I am going to win this on points even if I was to box his scone in. Everyone can say (if don’t get the decision) that I boxed well but he was aggressive and all that.

“Ward looked like he was aggressive but then he didn’t land a solid shot whereas I did. The only way of doing this boy is knocking him out.”