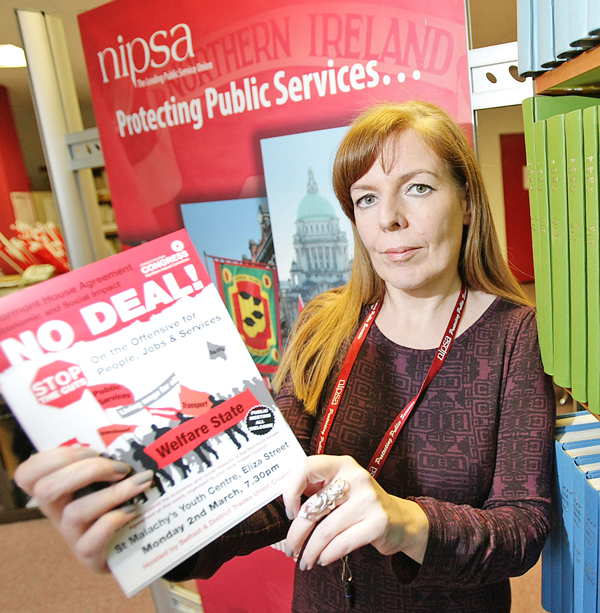 Naomi Connor is an organiser with NIPSA and head of a campaign in the South of the city organised by the Belfast Trades Union Council that aims to raise public awareness of the threat to funding for services including hospitals, schools, transport, community projects, as well as proposed cuts to benefits.

The campaign is to culminate with coordinated industrial action on Friday March 13 by public sector workers across the North, accompanied by a public demonstration in Belfast city centre.

A number of public meetings have been organised by campaigners to publicise the demonstration in the Markets and at Queen’s University, with a further meeting scheduled 7.30pm tomorrow Wednesday (March 4) at Ballynafeigh Community Development Association.

“We are now five years into austerity and the vast social cost this policy is imposing on the vulnerable and working class is obvious,” says Naomi.

“We have been told that the North would be protected from the worst impact of austerity but the most recent budget at Stormont, alongside the cuts included in the recent Stormont House Agreement, obviously contradict this.”

The most recent Stormont Budget, finalised in January by Finance Minister Simon Hamilton in the wake of the Stormont House negotiations between the British government and local parties, will see a number of cost saving measures implemented across the public sector intended to ‘rebalance’ the local economy in favour of the private sector.

Already announced cuts include a reduction in bus routes, the closure of minor injuries units, and limits to the hiring of special needs assistants in schools. A voluntary redundancy scheme for several thousand public sector workers has also been put in place.

However, Naomi disputes the argument by politicians that a reduction in corporation tax rate is a panacea for the North’s economic woes, or that a scaling back of public services will see the private sector pick up the slack.

“We have heard much about how reductions in the public sector will grow the private sector, with very little evidence to support this claim.”

“When someone is in employment, they spend their money in the local economy on goods and services.  How can the news that tens of thousands of workers losing their jobs be good for the local economy, especially small shops, cafes, hairdresser and other local businesses?”

Community and voluntary organisations are under particular threat in terms of funding, with job losses already announced in the community arts sector. Naomi suggests that cuts to these services are equally damaging as those to statutory bodies:

“Many of these community projects are not only essential, they are preventative and compliment existing public services, meaning that they are a lifeline for many people and in the long run their existence, saves on public expenditure.”

Naomi says that the trade unions are seeking a rejection of and reversal of austerity. She points to anti-cuts victories where respite homes have not been closed, the saving of the specialized Dal Riada hospital in Ballycastle, and the restoration of meals on wheels for pensioners as examples of politicians reversing cuts when placed under public pressure.

“We want those same decision makers and politicians at the highest level to value every service and every community in the same vein” she says.

Naomi concluded: “We are asking people to act at a local level and get alongside the trade unions and progressive forces in society to make a stand for what we believe to be decent society and one where people come before profit. Industrial action March 13th can stop this austerity budget in its tracks.”