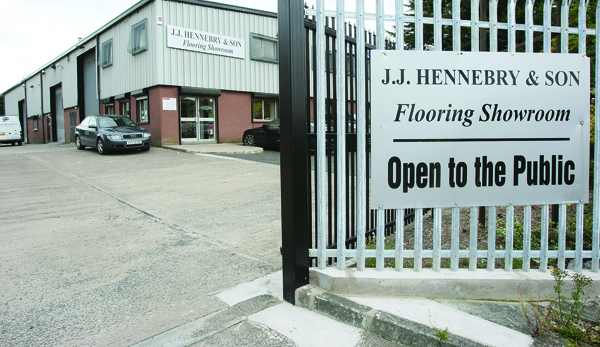 THE OWNERS of a West Belfast family-run business say they remain hopeful they can obtain restitution on thousands of outstanding euros they are owed after they fell victim to the collapse of construction giant Carillion and the subsequent liquidation of a southern building contractor.

Stockman’s Way based commercial flooring contractors JJ Hennebry and Sons, which has contracts throughout Ireland and across the water, are owed in excess of €320,000 for work carried out in Carlow and Kells at schools and further education sites.

Carillion collapsed back in February of this year and its knock-on effect is set to cost the taxpayer at least £148 million. The UK firm had hundreds of public sector contracts and its collapse led to devastating ripple effects across Ireland.

Partner and contracts manager John Hennebry Jnr said the company, which has been trading 50 years, has seen its workforce which employed 90 staff, now stand at 30, as the result of the Carillion collapse and its crippling knock-on effects has “wiped the last four to five years of trading for us.”

“We were dealing with Sammon Contracting Ireland – their contract was with Carillion and now the two companies are bankrupt. We had been working up until last November on school projects down south across a number of sites but around that time applications started being knocked back, our work reduced and payments were not being made.

“It became clear what was happening and since then we have been meeting with other sub contactors who have been left high and dry and formed a group on social media. We have met with local TDs down south and political reps in the north. We intend to fight this at the High Court in Dublin and our legal team are preparing our case this week,” he said.

John spoke of how outstanding issues remain around the certification of the buildings that work has been carried out on as well, and looking ahead said, “it’s going to be a long process, we don’t know what is going on behind the scenes, but we have to fight this legally.”

John described the fall out from the start of the year as “very hard”.

“My Dad was supposed to have retired a few years ago but hasn’t. You can imagine the effect this has had on us. As I said we will fight this and remain hopeful the outcome will go in our favour.”