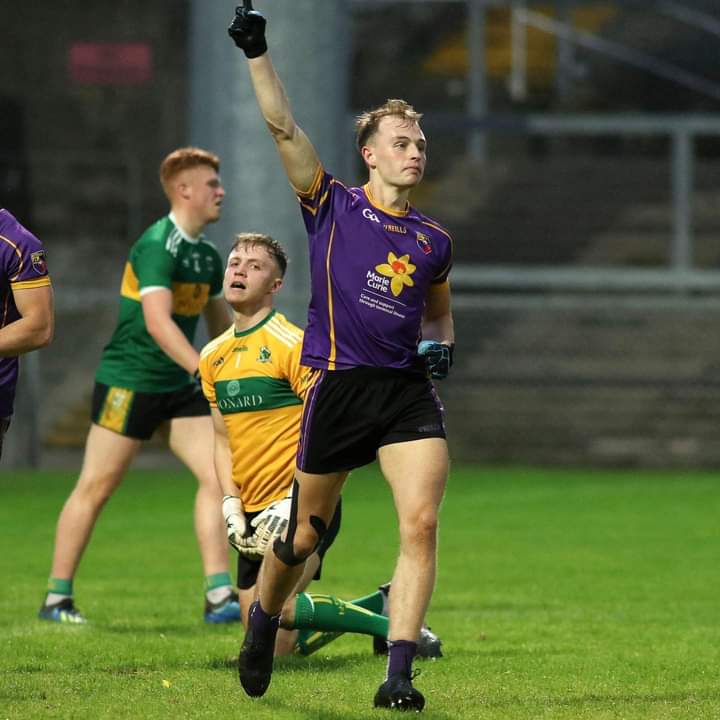 Ronan Beatty celebrates finding the net on Monday against Bryansford

THERE was an audible cheer of excitement in the main stand at Newry’s Páirc Esler as the Carryduff supporters watched the semi-final draw being carried out on the pitch following their side’s facile 3-15 to 0-11 win over Bryansford on Monday night.

Current kingpins and reigning Down Senior Football champions Kilcoo were the first team out. With the Magpies chasing an eighth Frank O’Hare Cup nine seasons, they were the team everyone wanted to avoid and they were pitted against last year’s beaten finalists Warrenpoint.

That left Carryduff and Ballyholland in the other semi-final and both clubs will relish the opportunity to make it through to their first ever senior county final.

When they last met in the Championship, Carryduff claimed a 2-10 to 0-11 win in the first round of the 2018 Down before Carryduff lost out to eventual winners Burren and then Loughinisland.

Ballyholland reached the semi-final stages of last year’s Championship, but suffered a heavy 2-15 to 0-4 defeat to Warrenpoint.

As he digested not only the semi-final draw, but a stunning quarter-final showing from his team, Carryduff boss DJ Morgan insisted he wasn’t concerned with who his side were pitted against in the last four.

“I honestly didn’t care who was got as long as we were in the draw,” stated Morgan.

“There is no point in lying because you have to play the big teams as you progress. I didn’t have a preference for any team – we are just delighted to be in the semi-finals.

“We beat Ballyholland in the Championship two years ago, but that means nothing now. That would only serve as motivation for Ballyholland – they will be coming to clip our wings.

“It would mean the world to this group of players to reach a Down senior final. We’ll be focused on recovery this week and go again at the weekend and, hopefully, we’ll be going again the week after.”

In the aftermath of Monday night’s stunning 13-point win over Bryansford, the Carryduff boss was, understandably, full of praise for his charges.

They suffered a 4-11 to 1-9 loss to Clonduff in the first round after conceding a goal after 10 seconds, but bounced back with a 3-10 to 1-12 win over Longstone after Downpatrick were removed from the Championship following a Covid-19 outbreak.

That Bryansford had subsequently beaten Clonduff before the Hilltown men lost out to Warrenpoint on penalties on Sunday night gave the form of Steven Poacher’s side a massive boost going into Monday night’s last quarter-final clash.

Yet, Carryduff simply tore up the script with a devastating display of fast, counter-attacking football and first half goals from Josh Connery, Ronan Beatty and Joe Tunney gave them a 3-5 to 0-8 lead at the break.

“They just stood up and enjoyed the occasion and, as the game went on, they just grew in confidence,” reflected Morgan.

“We got off to a great start whereas in our first game against Clonduff we didn’t. We had been on the receiving end of that so we knew the kind of boost it can give a team to get that kind of a start.

“The message going out for the second half... we had seen Clonduff hold a lead at half-time against Warrenpoint and they didn’t drive on.

“We wanted to get a couple of early points in the second half and we did. That settled the boys and Jonny Henry sat in deep and caught a few balls when they went looking for goals. Our defence was great again tonight – it is hard to single anyone out for praise because they all worked their socks off out there.”

Carryduff will be hoping that both Daniel Guinness and Rory Anderson recover in time for Sunday’s semi-final after both were taken off in the closing stages of Monday night’s game, bur Morgan said both were more precautionary than anything major.

Having guided Carryduff to a hat-trick of Down U21 football titles, Morgan knows his side have a great chance to make more history this weekend.

Kilcoo’s meeting with Warrenpoint later on Sunday night is a repeat of last year’s decider and is the more high-profile semi-final.

Yet, a repeat of their heroics on Monday night would surely be enough to see Carryduff progress to their first ever senior county final.

“This is history for them – Carryduff have never been to a Down Senior Football Championship semi-final,” added Morgan.

“The majority of this group have been history-makers for years, winning U21 titles – where are they going to stop?

“We just hope they keep going. Our goal in pre-season was to retain our Division One status and the Covid-19 pandemic has taken care of that. Our other goal was to go one better in the Championship after losing the quarter-final last year.

“We’ve done that now so we can enjoy the build-up and see where we go from here.”