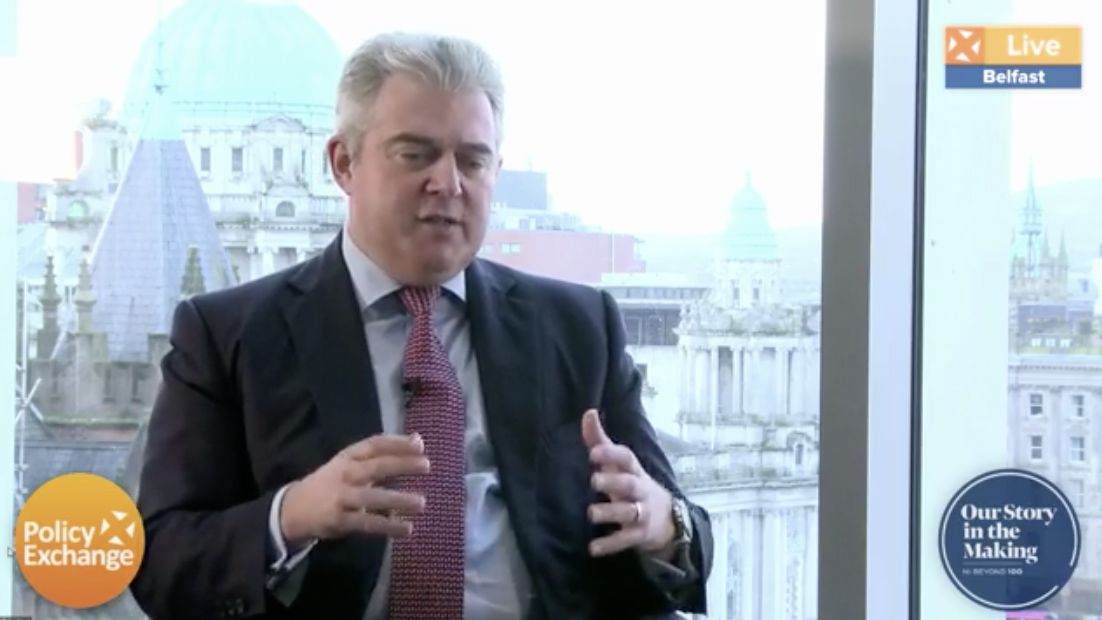 SECRETARY of State Brandon Lewis has announced that his government is to allocate three million quid to the marking of next year’s centenary of This Here Pravince.

The celebrations – or whatever title the events fall under – will all fall under the branding of ‘Our Story in the Making: NI Beyond 100’. It will be interesting to see quite what ‘our’ story is and who ‘we’ are.

(3/3) We must harness the talents of all our people for the common good and make Northern Ireland a success. #NI100 #Beyond21 pic.twitter.com/DKHFSdllUs

Two faces feature prominently in the press release issued by the Northern Ireland Office on Monday: poet Seamus Heaney and Olympic golden girl Mary Peters. Strange choice, if you think about it. Heaney famously wrote the lines ‘Be advised my passport’s green./No glass of ours was ever raised to toast the queen.’ Loyal Ulster was so enchanted by the poem that not a single unionist politician attended Heaney’s funeral in 2013.

Then we come to Dame Mary: Ulster’s Sweetheart. In identifying her as the face of Noel ’n’ Alan the NIO would appear to be on stronger ground. But it falls to Squinter to point out that the 1972 Munich Olympics gold medallist was born in Halewood, Merseywide. In other words, she’s a Scouser. More Cilla Black than Orange Lil. Not to worry, it gave Squinter a lorra lorra laughs.

Bouffant Brandon said he was excited at the prospect of a year of hailing all that’s good about Our Wee Country. “2021 marks 100 years since the creation of Northern Ireland,” he went on, “which paved the way for the formation of the United Kingdom as we know it today. We will use this opportunity to hear untold stories, to promote Northern Ireland on the world stage and to celebrate its people, culture, traditions and enterprise.”

Squinter’s confident that the centenary is going to be fair and balanced – the launch day was evidence that Brandon is a good faith actor and will strive to ensure that all shades of society are represented in the coming events. For instance, the interview he gave was to Dean Godson, Director of the right-wing Tory think tank Policy Exchange. Sadly, in an unfortunate coincidence, the photos of the men went up on the Policy Exchange website against Orange – sorry, orange – backgrounds.

But the Great Yarmouth MP soon put that blip to rights when he said during the interview what just about every nationalist in the north has been longing to hear: that he’s going to ensure that the Overseas Operations Bill applies also to these six counties. The Bill, of course, means that people who get injured or fall ill while on holiday in the EU will be able to have their surgery paid for by the state and… Wait… Just a second… No, that’s the wrong Bill. Let’s see now… Oh, yes… The Bill that Brandon’s actually talking about will give an amnesty to every single British soldier who ever committed a crime here.

Not to worry, Brandon and his chums have got plenty of time to get things right by the turn of the year – since they’ve only got Brexit and Covid to worry about.

The UK government is being absolutely battered by the media today over this humiliating Christmas U-turn. Not to worry, though, @BBCNews is still their safe space. pic.twitter.com/Hctp1dVjsJ

The UK government has warned the EU that it is putting four gunboats on standby to protect British waters in the event of a no-deal. Perhaps it would be more accurate to say that the gunboats will be protecting British fish, because the gunboats – if they are deployed – will be used against Johnny Foreigner should he turn up off the coast of Blighty in a trawler.

The French don’t seem particularly worried by the threat. An Elysée Paris spokesperson told Reuters after Boris Johnson made the threat: “Keep calm and carry on.” And if that’s not taking le Mickey Squinter doesn’t know what is.

The news sent the British tabloid press into a cutlass-rattling frenzy and they regaled their proud and excited readers with colourful tales of High Seas derring-do, with Royal Marines abseiling on to fishing boats to teach the filthy foreigners a lesson. The papers were careful, however, not to mention that the last time the Brits got into a war over fish they got slapped around the face with wet kipper. In the wide and cold waters of the North Atlantic the conflict took place, over international fishing rights. After three years of threats, hijackings, shots fired and planes deployed, Britain surrendered and its enemy claimed victory for cod – and Iceland (a country with a population considerably smaller than that of Belfast).

So when the UK goes up against 27 EU countries and makes threats against NATO allies, Squinter’s not sure that it’s going to end well, if indeed it ever starts. It’s all the most tremendous nonsense, of course. The UK already has an eight-boat-strong fishery protection squadron – all of them equipped with big guns, another thing the tabloids didn’t bother mentioning because it kind of killed the story a bit.

And it’s also tremendous nonsense because 55 per cent of the British fleet’s quota has been sold to the same Johnny Foreigner that they’re going to force to walk the plank. Throw in the fact that 75% of the 45% caught by Brits is sold to the EU while most of the fish eaten in the UK is imported and you begin to see that Admiral of the Fleet Johnson is the lead in a very unfunny comic opera.

HERE’S something that Squinter never thought he’d be writing: Belfast is a border town.
Or, at least, it will be whatever happens when the Brexit transition period comes to an end in the New Year. That’s because, even as we speak Agriculture Minister Edwin Poots’ department is busy building infrastructure at our port to check that stuff arriving from England, Scotland and Wales meet EU standards.

It’s particularly surprising since it’s only two years since Arlene Foster made her ‘blood-red line’ remarks in which she positioned herself as a kind of Ballinamallard Boadicea.
“There cannot be a border down the Irish Sea, a differential between Northern Ireland and the rest of the UK,” she told the BBC. “The red line is blood-red.”

She added: “This is too important to be playing around with things because this is the union – this is what brought me into politics.”

She was speaking when the DUP’s 10 MPs had their boot on Theresa May’s neck – a time when if Nigel Dodds (for younger readers he used to be MP for North Belfast) had asked the Prime Minister to jump she wouldn’t only have asked how high, she’d have done an Eddie Van Halen impression while she was doing it.

Squinter should point out that this also means that Larne is about to be a border town too – a border town whose MP is the Right Honourable Samuel Wilson. And Warrenpoint – let’s not forget Warrenpoint. It could be argued that it’s effectively a border town anyway, being a short boat ride away from the Republic, but County Down’s border town has always been Newry. No more. Now it has two.

What’s it all going to mean. Should we start calling Belfast El Paso? Or, since Dundalk already has that name, might Tombstone be a better title (and very fitting vis à vis Arlene’s political ambitions)? Will we see rusty oil tankers full of dodgy diesel clog the back roads of the city? Are we now living in what the British tabloid press like to call Bandit Country?