DÚLRA: Nature the loser as diggers devour ancient hedgerows in our backyard 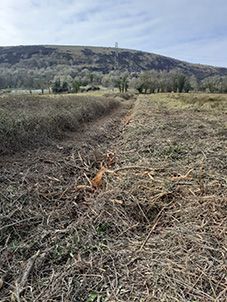 PROGRESS? The devastated hedgerow and, below the St Pat’s cedar

THIS is how easy it is to demolish hundreds of years of natural history.

An ancient hedgerow on the Belfast Hills was effortlessly scythed down by a mechanical digger last week to make way for new homes.

It’s the price of progress that we’re willing to pay as cities expand. And Dúlra doesn’t oppose it – new homes are certainly needed.

But it’s not the only hedgerow that has been levelled. All across our hills and on the outskirts of Belfast they’re disappearing at an alarming rate.

No planning permission is needed to uproot a hedge. Farmers are doing it all the time – Dúlra recently noticed a series of old hedgerows near Dundrod had been dug out and the dead, twisted branches piled up like a bonfire in the middle of the field.

Those hedgeless fields will be able to grow more crops or feed more cows, so it takes a brave person to make a stand against this ‘progress’. Agriculture will be boosted and farmers will make more money – but at what price?

Ireland was once synonymous with patchwork, tree-lined fields with all their associated wildlife. No longer.

Another fantastic hedgerow as thick and thorny as a forest ran parallel to the one that was scythed down in the grounds of St Patrick's home. It was at least a quarter of a mile long and ran alongside the back lane of St Mary’s school up to the Springfield Road, providing a wildlife corridor between mountain and city.

For Dúlra, it was the finest hedgerow on the whole mountain. We walked alongside it several times a week on our way to the mountaintop, but every few yards we’d have to stop when our terriers would be barking in the undergrowth – they’d found yet another hedgehog. They’d often try to roll them out with their noses and then bounce back in pain as the hedgehog’s spikes sank into their snouts. The dogs could do them no harm.

Hedgehogs are a sign of a hedgerow’s health – and this one had more than any other.
Today, as you can see in this picture, that hedgerow has been replaced by a wire fence, leaving just a furrow where it once was.

Maybe someone thought the hedges were untidy and not as secure a barrier as the iron railings.  But at the stroke of a pen and the slice of a digger’s blade, another precious part of the Belfast Hills and all its wildlife were annihilated. Many of the trees at the old St Pat’s home are thankfully being kept, including, Dúlra hopes, this beautiful cedar which is well over 100 years old. Dúlra visited the site with noted local birder Geordie Hynes this week – and Geordie always teaches Dúlra a thing or two.

While Dúlra would stand and admire a great tree like this, Geordie will go right underneath it and minutely examine the upper branches. “Birds spend most of their lives doing nothing, just resting,” Geordie told Dúlra. “They don’t play, so when they’re not feeding, they just find a safe place and let the world pass by.”

Two beautiful birds were resting on the inner branches of the cedar just feet from our heads – a wood pigeon and a mistle thrush. Dúlra could clearly see them peering back at us – they felt totally safe under the huge canopy.

When Dúlra was leaving, he stopped to admire the majestic St Pat’s stone gate pillars on the Glen Road. And then he spotted the old bell with its missing button which sent his mind racing back 40-odd years. On our way home from St Teresa’s there wasn’t a day when we didn’t press it and run away. Dúlra has no idea if it rang in the gatehouse on the other side, but he can still remember the smooth button and how far your finger would go in.

The young Dúlra was intrigued by this wee white gem ... so intrigued in fact that one day he got his penknife out and removed the precious object like you would a pickle.

He showed it around the class and everyone marvelled at the smoothness of the button, polished by thousands of fingertips – mostly school kids' – that had pressed it since the home was opened in 1957. It's probably at the bottom of an old box in the attic. Do you think it's worth replacing after all these years?