Christina set to take on roles 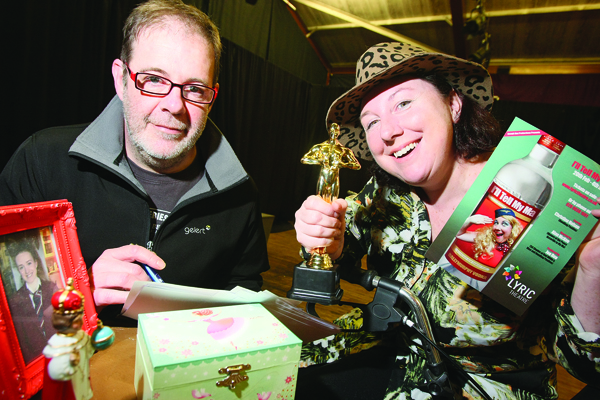 POPULAR PLAY: Actress Christina Nelson, who will star in I'll Tell My Ma at the Lyric Theatre, with director Alan McKee

TAKING on the mantle of bringing multiple characters to life in West Belfast playwright Patricia Gormley’s I’ll Tell My Ma, actress Christina Nelson says it is a “huge honour” to be involved in the critically acclaimed play.
Having wowed audiences last year at the Mac Theatre during a sell-out run of the semi-autobiographical tale of family life in West Belfast, Christina, along with director Alan McKee, are putting all shoulders to the wheel before the curtain goes up at the Lyric Theatre on February 20.
“I had worked with Patricia with the play when it was initially starting out and touring around the folds and residential homes in West Belfast,” explained Christina.
“I thought the script was great and Patricia has great support from her family and friends around her in that they encouraged people to go out and see the production including producer Joe Rea who suggested at the time that I be in it. Everything really just came together from there.
“I play a variety of characters, I mean there are loads, it is really challenging.”
Christina told the Andersonstown News that the play is perfect for those who might not frequent the theatre regularly.
Director Alan McKee, one half of comedic duo Grimes and McKee, spoke of how he and Christina, despite a tight rehearsal schedule, were retweaking certain scenes from the show.
“Through the script we are exploring the characters just that bit more. I directed Christina during the run at the Mac last year and the show went down a storm. We have a number of props as well – a pram that will be given a new lease of life and a few other bits that weren’t in the previous run.”
I’ll Tell My Ma runs at the Lyric Theatre from February 20 until March 4. For ticket information telephone the Lyric on 02890 381081.