‘Cillian brought joy to everyone he met’ 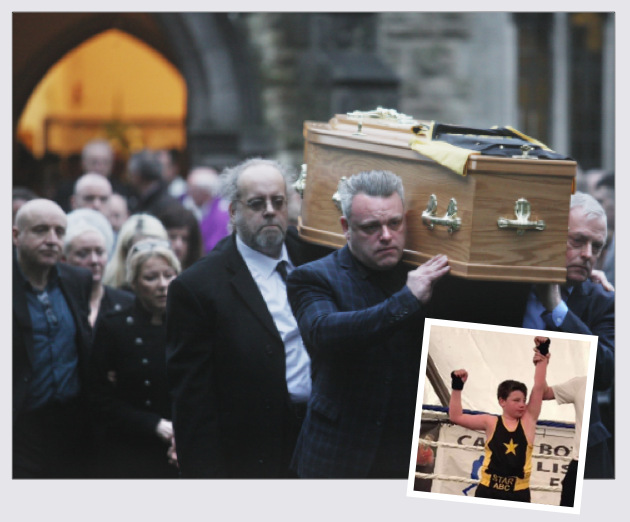 Cillian is laid to rest and, inset, the talented young boxer celebrating a win

A LOCAL schoolboy “brought joy to everyone he met,” mourners were told at the funeral yesterday of 11-year-old Cillian Draine.

Hundreds of mourners gathered for the young amateur boxer’s funeral which took place at St Therese of Lisieux Church on Tuesday afternoon.

Fr Gary Donegan said in his Homily that Cillian’s death had devastated the community.

"The sense of concern and support is palpable," he said.

"You can literally feel it in the air. Everyone is thinking about this little family today, and the tragic loss of this child, Cillian.

"The natural order has been shattered. No parent expects to face the death of one of their children, especially at such a tender age. The sudden nature of Cillian’s death has intensified for all who love him, the deep sense of pain and loss that comes with grief.

“He had a voracious appetite for life and fun, which was evident in the revolving door of mum Mary’s house as friends came and went.

"There were never enough hours in the day for Cillian to do everything that he wanted to do.

"Life for Cillian was there to be enjoyed, and he lost no opportunity to experience as much of life as he could. To say Cillian was into everything was an understatement. He was creative, and inquisitive with a great passion and commitment to sport. He loved to be in the kitchen, cooking, baking and experimenting. Music and art were a massive part of Cillian’s life.

"His greatest love, though, besides his family, was boxing. He was a dedicated and committed member of Star ABC.

"What a wonderful legacy for anyone to leave behind for his family and especially for his friends.

Cillian is survived by his parents Mary and Mick and brothers Fiontan and Michael.