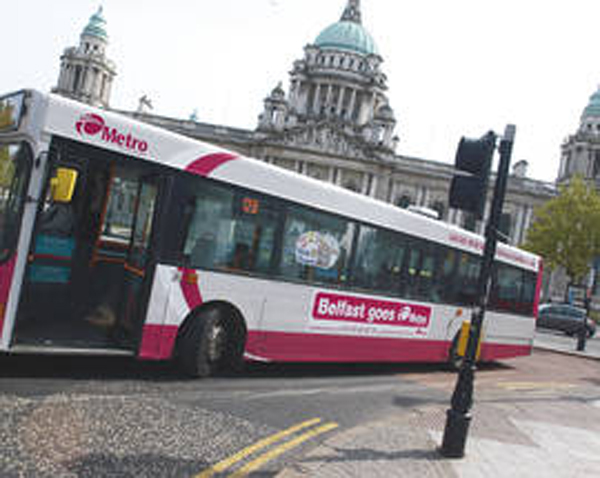 THE decision by Belfast City Council to provide free Christmas parking in the city centre in 2015 cost Translink a quarter of a million pounds, the bus operator has claimed as it called for City Hall to scrap the scheme this year.

In a bid to boost festive trade in the city, over 1,500 spaces were offered free after 6pm on weekday evenings and all day on Saturday and Sunday over last year’s busiest Christmas period.

But Translink say increased traffic and a build-up of cars waiting for spaces to be freed up caused chaos to their city network. They’re desperate to avoid more disruption and the associated heavy cost this time round.

The provider claims 2,000 journeys were hit by disruption caused by the build-up of private vehicles in the city centre, while punctuality levels fell and complaints rose. Added to revenue lost to the public transport provider by shoppers taking their cars into Belfast instead of the bus, Translink say the cost to them of the free-parking scheme in 2015 was in the region of £250,000.

Translink Chief Executive Chris Conway has written to City Hall Chief Executive Suzanne Wylie, telling her: “The pre-Christmas period last year was a particularly challenging one for bus and car users in and around the city centre. This was primarily as a direct consequence of queuing on entry to off-street car parks and/or circulating for available parking spaces.”

Mr Conway said Chichester Street and Victoria Street were particularly badly hit and he called on the Council to work with Translink this year in promoting park and ride facilities at Christmas.

Belfast City Council’s Growth and Regeneration Committe is expected to discuss the Translink request on Wednesday.

“It is generally accepted that the adverse effects of this seasonal congestion impacts on all road users in terms of journey time and ultimately reduces the attractiveness of Belfast as a shopping destination,” continued Mr Conway. “However, it would be Translink’s view that in comparison with out-of-town retail centres, Belfast city centre has a unique asset as it can offer additional travel options over the private car with its current bus and rail networks.

“Translink would therefore wish to collaborate with Belfast City Council to consider how best to encourage greater uptake of these sustainable modes.”

Outlining the technical problems caused to Translink by the free Christmas parking scheme, Mr Conway added: “Free parking spaces, available after 6pm and all day on Saturday and Sunday, seemed to be taken up fairly quickly. As a result car users had to regularly wait in long queues or, instead, circulate looking for spaces at alternative commercial car parks, further impacting on traffic progression around the city. Furthermore, many shoppers were unaware that the free parking was evenings only during the week, which also caused traffic congestion even before the normal rush-hour periods and may have deterred people from coming into the city to shop later in the evening.”

He added: “Christmas is such an important financial catalyst for the heart of the city and we know that congestion not only impacts on our service, but can also affect local businesses and retailers as people can be put off by delays and disruption and find alternative locations to visit.”