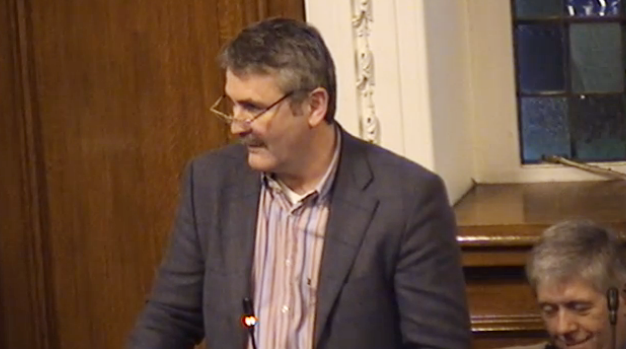 FROM THE CHAMBER: The first full Council meeting of 2016 at Belfast City Hall was dominated by one subject: football.

More specifically, it was dominated by consideration of whether Belfast City Council should hold a joint reception for football teams north and south of the border to mark their qualification for this summer’s Euro 2016 in France.

The SDLP motion to invite both teams had initially been agreed at committee level but several amendments were proposed and debated in the chamber last night.

The meeting was relatively hiccup-free at its start, with a few Councillors rising for various uncontroversial reasons – including to acknowledge recipients of the Queen’s New Year’s honours and the success of the BBC Sports Personality of the Year event held in Belfast in December.

And then the match started. It was the DUP’s Alderman Kingston who was first to his feet on the issue, querying why a second reception was necessary given that a reception was already held for the NI team last year. Holding another would give the impression the Council is “disorganized”, he claimed, before accusing the SDLP of “border politics”.  He finished by proposing an amendment that the Lord Mayor simply write to “the four qualifying teams of the British Isles” to congratulate them on their qualification.

Several other Councillors got up to give their tuppenceworth with the TUV’s Councillor Jolene Bunting saying the proposal had divided the city. Sinn Féin’s Councillor Niall Ó Donnghaile claimed the opposite: “The motion would recognise different allegiances in the city,” he said.  Councillor Michael Long (Alliance) described the situation as a “PR shambles” while Councillor Ruth Patterson (Ind) and Councillor John Kyle (PUP) claimed the issue was being politicised.

The PUP’s Billy Hutchinson, who had recently claimed a green light for the reception could spark massive loyalist protests, clarified his remarks at the meeting saying he was referring to “one controversial player” on the Republic side as opposed to the whole team. For the record, five protestors turned up at the back of the City Hall in response to a call by the Protestant Coalition.

Another amendment was then put forward by Ulster Unionist Councillor Jim Rodgers to invite all four teams to a City Hall reception – England, Wales, Northern Ireland and the Republic of Ireland.

Both amendments went to vote and both were defeated meaning the original motion to hold a joint reception for both teams will go ahead.