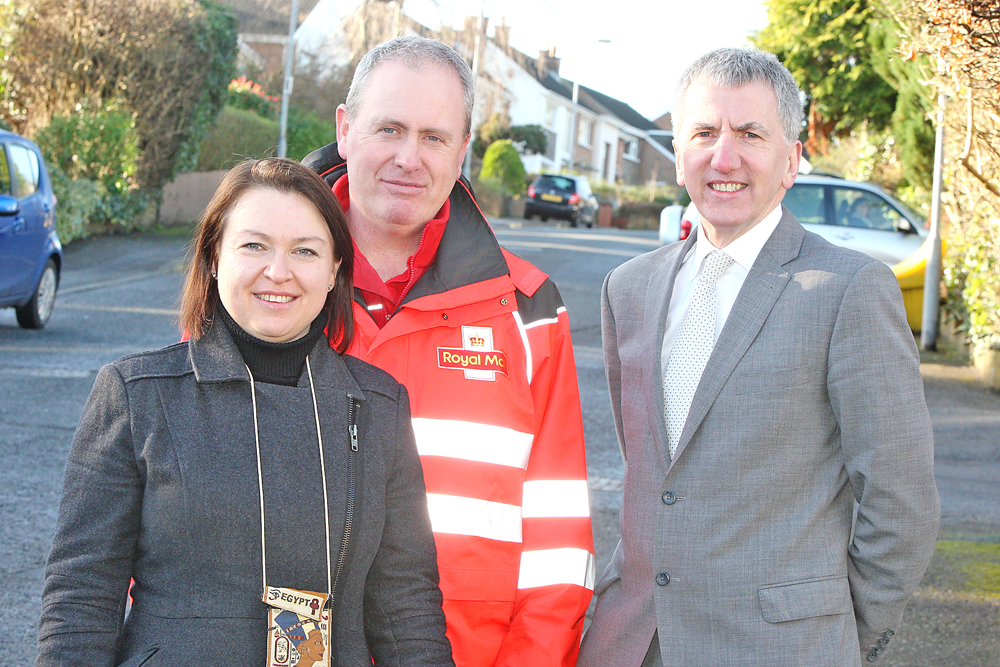 Postman Dermot McCabe with Deborah Beladi, the woman whose life he saved while out on his daily walk in and around Finaghy Road South, and South Belfast MLA Máirtín Ó Muilleoir

A POSTMAN has been hailed a hero after he administered life-saving CPR to a woman whilst out on his daily walk in South Belfast.

Hannahstown postie Dermot McCabe was congratulated for his real life heroics at a special reception in the Lord Mayor’s Parlour along with Deborah Beladi, the woman he saved.

Dermot explained how he had been out on his morning post walk in Greystown Park off Finaghy Road South when in heavy rain he noticed a woman was lying “half on, half off the road”.

“Deborah was dressed as if out for a run, of course your immediate reaction is good God, what do I do here?” he said.

“As I was holding her she was fitting and after about a minute her eyes rolled back, she went blue and stopped breathing on me. I had first aid training down through the years from the Scouts and from watching programmes like Casualty you kind of know what to do and I started CPR on her chest.

“A fella then pulled up in a car and I got him to hold her whole I went to try and get help from the neighbours. It was frightening at the time but all of a sudden Deborah came round. Thank God the ambulance came within ten minutes.”

Dermot explained how he kept seeing an image of Deborah “for ages afterwards of her passed out and me trying to revive her”.

“I was delighted to actually meet her again and we had good craic in the City Hall last week.

“I was delighted that my family could meet her and my memory is now different from when I found her that morning, it’s much more positive. Family and friends of Deborah have thanked me through social media which has been great.

“I’ve made a good friend in Deborah and I want to say thanks to her family for their kind words, it’s been very humbling.”

Deborah spoke of how she was “very grateful” to Dermot.

“Dermot could have easily ignored me but he came over to me, stopped what he was doing and took out his time to save my life,” she said. “When I recovered I wrote a letter to Royal Mail telling Dermot’s employers how very grateful I was and thankful for what Dermot did. He is such a brave postman.

“Nowadays everything is very technical with phones and computers but the idea of a  postman is very old-fashioned. Postmen are still delivering post, rapping doors, on the road. If for a split second Dermot hadn’t done what he did I might not be here,” Deborah added. “I’m just very grateful. I moved to Belfast a few years ago and I’m really appreciative to the people of Belfast and I’d just like to say thank you.”