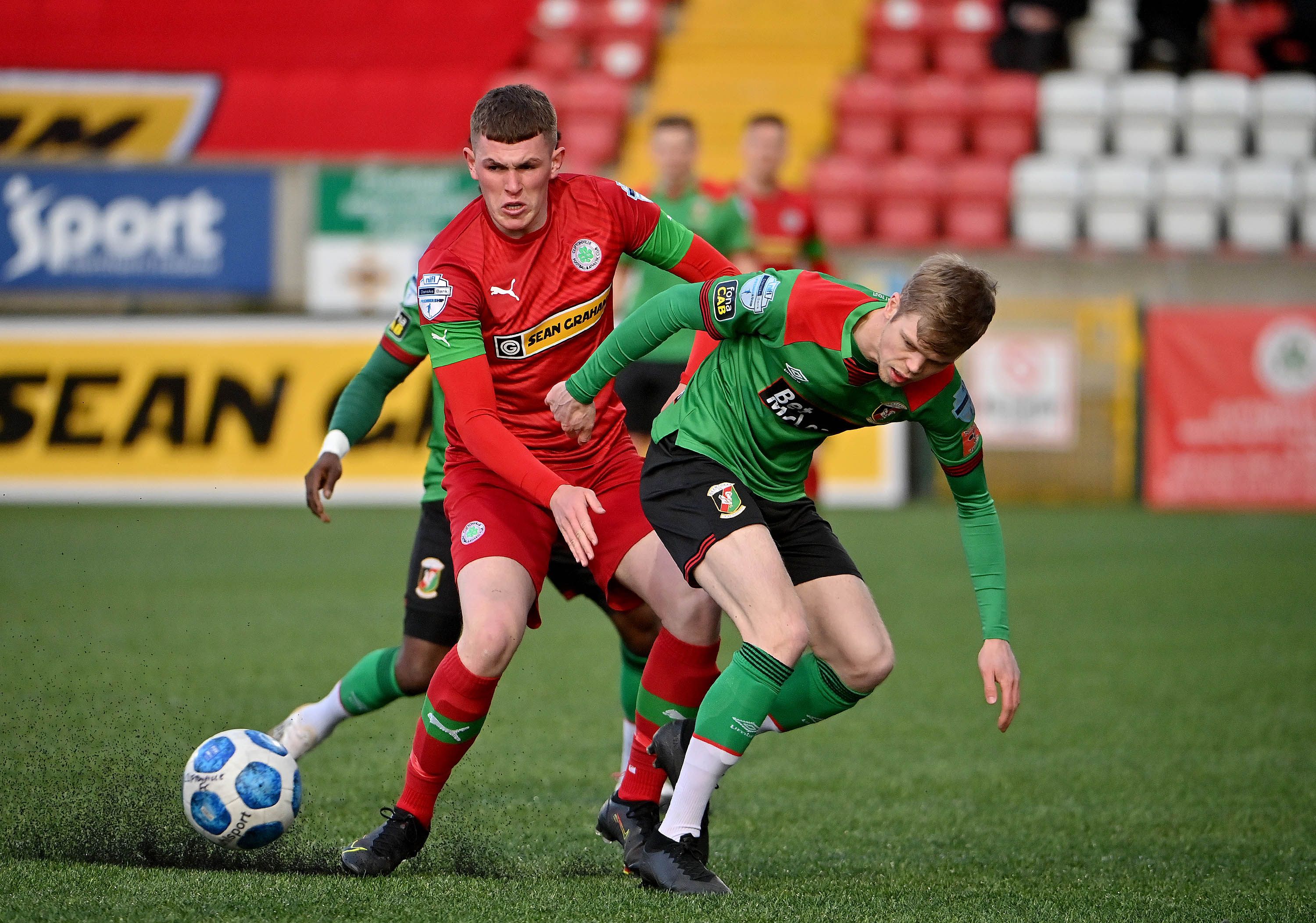 Aaron Donnelly is an injury doubt for this evening's game Presseye

CLIFTONVILLE manager Paddy McLaughlin insists that it will be business as usual this evening (Tuesday) as they get their Sadler’s Peaky Blinders Irish Cup campaign underway.

At this stage of the season, clubs would be gearing up for the showpiece decider at the weekend but Portstewart travel to Solitude (7.45pm kick-off) in a first-round tie.

The Intermediate outfit from the north coast are yet to kick a competitive ball in anger this season, although McLaughlin isn’t getting complacent about the task in hand and believes it is time to break the long cup hoodoo at Solitude.

“We’ll not go into it in anything other than like we always do,” he insists.

“Every game is a big game for us, especially now in the run-in and with the Cup only starting. It’s been a long time since the club has won the Cup so we want to break that long run for the supporters and especially for the players.

“We’ll not be going into the game complacent because I think we’ve put that out of the side over the last couple of months.

“Complacency isn’t there anymore and we don’t want that to creep back in so we’ll go as strong as we can, like we always do, and we’ll treat them with the respect that they deserve but we’ll go to try and win the game.”

🎥 The live stream of tomorrow night's Irish Cup first round tie with Portstewart is now available to buy.

The Reds go into a game with further injury concerns after Liam Bagnall and Aaron Donnelly were both forced off during Saturday’s 5-0 victory over Carrick Rangers.

McLaughlin branded the injury luck horrendous but is pleased with the progress of youngsters that have stepped in, including Odhran Casey and 17-year-old Stephen McGuiness who made his debut as a half-time sub at the weekend.

“We’ve another two that have come off injured and it takes us up to 15 injured senior players,” McLaughlin revealed.

“We started the game with 13 injured and now we’ve added two on with Bagnall and Aaron Donnelly. It’s a horrendous injury record but it’s good to see the young players coming through and getting their chance because they deserve it.

“They’ve been here with us all season and bided their time. If they weren’t good enough, they wouldn’t be here, but their patience has paid off.

“Young Casey has come on and was very good. Stephen McGuinness just turned 17 and made his debut and I thought he was superb in the second half.

“He’s got booked early in the game, which was a bit harsh on him, but his performance after that was top drawer.

“He played with a lot of experience you’d nearly think. He played the situation really well and didn’t get involved in tussles or silly tackles after his booking. He is going to be a class player for us."

🏆 Irish Cup history will be made at Solitude tomorrow night when Cliftonville become the only Club to have featured in all 1️⃣4️⃣1️⃣ seasons of the competition's existence.

Saturday’s win takes the Reds into fourth place above Larne going into the final five games of the split and McLaughlin feels they are hitting top form at the right moment.

“The boys have been excellent since the turn of the year,” he acknowledged.

“It seemed that no matter how well we played or how many games we won, we didn’t seem to move position in the league, but finally we’ve jumped up a position above Larne. There is still a lot to play for and there is a lot of big games coming up after the split.

“It’s all to play for now. We’ve put ourselves in a great position going into the split and hopefully we’ll close in on second and third place. Second definitely gets you into Europe and third could also be a possibility. We’re closing in on those positions and we’re hitting top form at the right time of the year.

“In scoring one goal in the second half, you can look for it in a negative light if you want to, but I look at it in a positive light where we’ve score five.

“It’s brilliant to score five against any team in this division. It takes some going because there is a lot of quality. We’ll not say we’re disappointed with scoring five goals because it is an achievement on its own in this league.”

McLaughlin was also keen to praise hat-trick hero Michael McCrudden and hit out at his critics since joining the club back in January of last year.

“There were people out there that were foolish enough that were doubting him in his first year here,” believes McLaughlin.

“They were doubting could he do it here and whether it was a sensible signing, but those boys have gone quiet now and they’ve gone quiet for a while because Michael has been flying for us in the last couple of weeks.

“Long may it continue because he has been excellent along with Currany and young Paul O’Neill who is fighting alongside the two of them to get in the team. I’m delighted for him on a personal note because I said it a few weeks ago that his personality and character within the changing room has been phenomenal.

“When he wasn’t playing, he never showed his frustration or disappointment. He kept getting on with it.

“He’s the first man to fight the corner for any player when it isn’t going their way on the pitch and fair play to him. He’s got the chance and he’s taken it with both hands.”