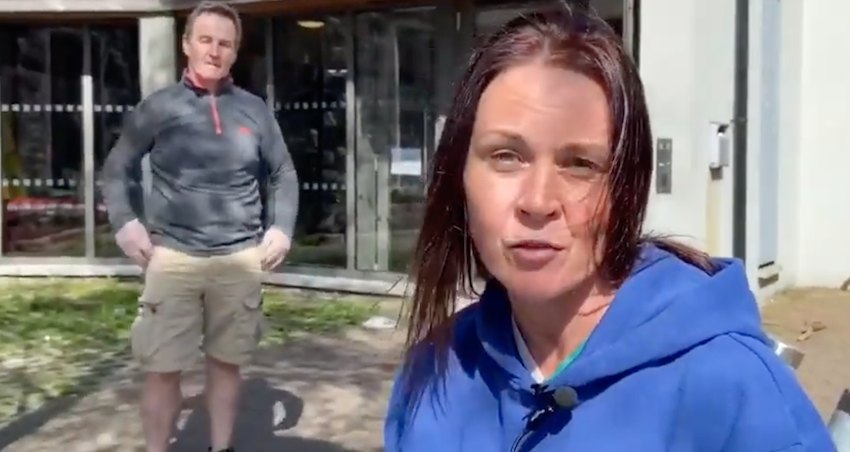 Community food bank volunteers in the Duncairn Culture and Arts Centre have been paying tribute to the public for their donations since the Coronavirus Crisis started.

Nichola Bradley (pictured on our homepage), the powerhouse behind the initiative, has co-ordinated the relief effort over the past three weeks to help families left high and dry during the emergency.

Support for her efforts has come from Belfast City Council and the Department of Communities, but locals have also pitched in with contributions and as volunteers.

The community food bank had been operating from a smaller premises in Ardoyne but moved to the Duncairn Culture and Arts Centre on the Antrim Road at the onset of the crisis to deal with a dramatic surge in demand.

Rev Bill Shaw, director at Duncairn, said he was pleased to open the centre — which had been shuttered as a result of the pandemic — for the food bank.

And North Belfast MLA Gerry Kelly, who has pitched in to help out with deliveries, said he was especially gratified to see the extent of the co-operation between all the emergency providers across North Belfast. "Groups are focusing on the areas in which they can excel and ensuring that they are working in tandem," he said. "The North Belfast community rose to the challenge immediately and these food parcels have made a huge difference to families who are really struggling at this time. It's my belief that this community spirit will survive the pandemic and change society as we know it on the other side."

The Sinn Féin man said poverty has become a reality for people who previously didn't realise it was a part of ordinary life for many. "It's hard way to learn a lesson but I do think many people who have been made jobless as a result of the crisis are realising for the first time how tough it is for families trying to get by on Universal Credit. There was always a huge need out there but this crisis has certainly accentuated that need."

Anyone who wishes to seek help from the Community Food Bank should call 07783-613609. Organisers say no one will be turned away.