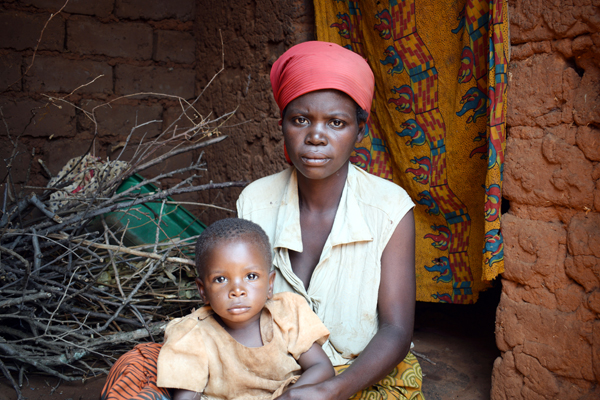 Robin Livingstone has been to the east African country of Burundi to visit projects that will benefit from Concern Worldwide’s Food in a Fragile World appeal. Here’s his third and final report.

IT’S hot and sunny again and Esperance Ciza desperately needs to get her 22-month-old son Don Divin to hospital.

He’s suffering from oedema, a build-up of fluid in the body caused by severe acute malnutrition (SAM). But the mother-of-eight has another problem. One of her children is already in the hospital and they won’t let her out because Esperance can’t pay back a loan for medicine. If she takes Don Divin, they’re going to want the money before they do anything. She’s thinking of going to the the hill authorities to ask for help. She’s about to be homeless because she can’t pay her rent, but the landlord isn’t the worst – he’s letting her stay for free until her child can be bought out of hospital.

Some days Esperance can get casual work to allow her to feed the children and herself, but only with a boss who’ll allow her to bring her children; most days she stays hungry in the house with her children. She can’t even breastfeed the younger ones because if she’s not eating right her milk is meagre and useless. When they eat they eat cassava – not the root vegetable, but the virtually nutrient-free leaves; and they’re cold and bitter, she says, because she has no oil and no salt.

Not that long ago Esperance decided it might be best if she took her own life. It was at that point that Concern-supported Community Health Worker Francine Kabondo came on the scene. She’s been supporting Esperance and has convinced her that ending it all is not the solution – for her or her children. She’s been giving her advice on how to feed her children – but advice can only go so far when there’s no money and no food.

Concern will begin its latest nutrition programme in March, 2018. Esperance will have to struggle through until then, with Francine by her side. It’s a familiar story. The UN estimates that 1.2 million Burundian children lack proper nutrition; 62,500 under-fives require or are being treated for SAM, with the figure steadily climbing.

What can Francine do when the new Concern nutrition programme kicks in come March? We visited 19-year-old single mother Celenie Hakizimana to find out. Celenie’s three-year-old son Bonheur is where Esperance wants Don Divin to be. The toddler is well on his way to recovery since undergoing a number of Concern nutrition sessions after he was born weighing just 1.5 kilos. The key factor was ‘Plumpy Nut’, a peanut-based paste designed expressly to combat SAM. It brings about rapid weight gain and the paste is easily transported and administered in a tear-open plastic envelope.

“I was taught how to eat correctly and how to feed my child correctly,” says Celenie. “Also, Francine kept calling to check on Bonheur’s progress. It’s still difficult. Sometimes if I can’t get casual work we only have a small breakfast and I’m afraid Bonheur might get sick again. Not long ago we were seeing each other three or four times a week, now I see Francine once a week. It’s like Bonheur is also Francine’s son.”

It’s hotter in the grounds of Rugombo Health Centre in Cibitoke than it’s been all week. Scores of mothers with infants are packed closely together on the hard ground wherever there’s shade; some luckier ones sit on the grass under umbrellas. Belise Nishimwe has been here since 7am and it’s now mid-afternoon. Her stepdaughter Sueva is a year old but weighs only 4.5 kilos. The arm circumference measurement – a crude but effective way of assessing a child’s nutrition status – indicates that her upper arm at the bicep has a circumference measurement of eight centimetres: Sueva is severely malnourished, and she’s getting worse. Soon it will have to be the hospital instead of the health centre.

It’s time for the Plumpy Nut to be distributed. From a cardboard box, a centre worker hands out portions to the large crowd milling around him. It seems random, but it soon becomes apparent that he knows exactly what to give and to whom. The mothers retreat to the shade with their babies. The package needs to be mashed by hand for twenty seconds before it’s opened; they do so. Some tear a small corner from the envelope and squeeze out pea-sized portions with their thumb and index finger straight into the baby’s mouth; others rip the packet open lengthwise and dip their little finger in the paste, place it in the baby’s mouth and lick their finger before repeating. They are required to come every day and wait for hours in the burning sun because, as a doctor tells me, if they’re given a week or a fortnight’s supply, there’s a good chance they’ll sell it at the market in order to feed their other children. In Cibitoke, forward food planning is not something that mothers are familiar with.

It’s two and a half years since Esperance Mpawenimana brought her daughter Clairia, now aged five, to a nutrition session run by Concern; the toddler was suffering from SAM-induced oedema. It wasn’t the first health battle that the child had faced. She contracted malaria when she was seven months and got so sick and feverish she required blood transfusions. Just under two years later she was struck by another debilitating attack of malaria and the Concern Community Health Worker Francine engaged; after further blood transfusions, Clairia returned home and again became feverish, but this time she also had oedema. Nutrition sessions followed in tandem with training on how to prepare balanced meals for her five children on a severely limited budget.

Concern helped her build a kitchen garden, which she had to leave behind when she left her rented home, but she’s going to build another one.

“People appreciate our work because at any time people can come, even during the night, if the child is sick,” Francine tells me. She’s looking forward to March when the next Concern nutrition programme starts.

“I had my solar lamp stolen so I have to use the light on my phone for night visits, which is giving me problems with the battery. It will be really great if Concern set up another scheme because I can’t do much at present because of the lack of medicines except tell people to go to the hospital.”

Next morning we drive out of built-up Cibitoke towards the remote and heavily forested slopes of the province’s Kabere district. Off the tarmac, the 4X4 is rolling like it hasn’t rolled all week, the narrow, rock-hard, deeply-pitted earth track turning into a footpath, at which point we’re out and hiking. The path gets progressively steeper and twistier until we can scale some parts only by grabbing on to exposed tree roots. At length we’re at the home of Joseph Ntacobizeye and Catherine Nahiman, another Batwa couple to have benefited from Concern’s Graduation Programme. They’ve eight children: five standing here with them, two at school, one away digging gold in one of the many waterside mines that dot the Burundian landscape. It’s very hot again, this time made almost unbearable by the climb and the sweat. The couple greets us and show us to a selection of wooden seats carefully and proudly arrayed under an overhead tarpaulin. I get my breath back in the shade before asking Joseph about life before the programme.

“We were eating once a day, we had poor clothes, no blankets, no kitchen utensils, no children went to school,” he says. “With the cash transfers we bought clothes, iron sheets and bricks. We will build a new house and an extension. We’ve had training about toilets and better sanitation. I continue to do manual work and work on my plot where I grow beans, maize and cassava. I’ve been trained on a business plan and am saving in a group of 20.”

I’m not particularly keen on climbing further, but Joseph wants to show us his bricks. Up we go, a short climb but the steepest so far. It’s worth the effort – and not just to see the bricks; at a certain point we enter a clearing and it’s as you’ve lifted your head through a cloud of banana leaves and around us the verdant gorilla mountains bordering Rwanda and the Democratic Republic of Congo shimmered in the rising heat.

Joseph’s got a two-hour walk to work when he gets casual labour, which means rising at 5am and getting home at 8pm. Having a crystal clear stream course down the hillside a few hundred metres away is literally a lifesaver.

The family use the bananas that grow in profusion on the hillside to make banana juice, Joseph also sells the better bananas at market to buy cassava and oil.

“After I build my house I want to buy pigs,” he says, “they grow fast and bring in a lot of money. Before graduation I had one set of clothes, now I have another for church.”

• If you’d like to give and have your donation doubled by the UK government, you can do so online at www.concern.net/fragile