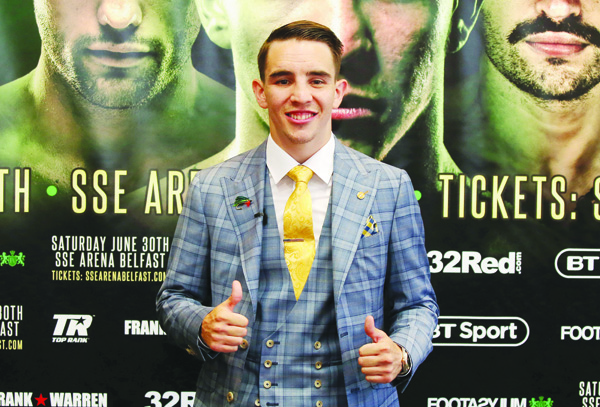 Michael Conlan ahead of his fight vs Adeilson Dos Santos

MICHAEL Conlan says the next 18 months of his career could depend on how he fares against former world title challenger Adeilson Dos Santos at the SSE Arena tomorrow night (Saturday).

Having amassed a 7-0 record away from home, Conlan returns to his native city to box competitively for the first time in over seven years and first time as a professional.

Given that stat, he could have been forgiven to enlist safe opposition, but the West Belfast man is having none of it as he steps up to 10 rounds for the first time against a man who could spoil his homecoming party.

“This fight could play a major role in how my next year and a half goes,” stressed the 26 year-old at yesterday’s final press conference at the Clayton Hotel.

“This is the type of quality opponent who I can show I can do a job against in style and if I do that, it sets me up nicely.”

It was a surprise loss to Declan Milligan back in the Ulster Seniors in February 2011 when Conlan last boxed in his home city, but there has been a lot of water under the bridge since then.

A clean sweep of major medals including World, European and Commonwealth gold as-well-as Olympic bronze preceded the ‘robbery in Rio’ at the 2016 Olympics and then a first year in the pros where he has twice topped the bill at Madison Square Garden and boxed on major undercards of superstars like Vasyl Lomachenko and Manny Pacquiao.

This return to home soil could bring pressure, but Conlan is quick to deflect that, saying this is simply another fight to be won and the sense of occasion will be for the fans on the night.

“I’m still 100 per cent focused on this. I need to be clean, clinical and destructive – an assassin-type mentality,” he warned.

“It’s just another day at the office, not the homecoming, just the next fight and another part of the job. It’s not anything special or different, just business I have to take care of. If I think of it any other way, it adds pressure and I’m not going to do that.

“I’ve boxed on big stages around the world so I know what to expect.

“Saturday night is going to be different obviously, but I have to trim it back to what it is – a 20x20ft ring with me and another guy who has two arms, two legs and a head. I just have to go in and take care of business.”

Dos Santos was notable by his absence at yesterday’s press conference despite taking part in Wednesday’s open workout at City Hall, but Conlan says he is not letting that unsettle him or plant a seed of doubt as to the Brazilian’s mentality going into tomorrow.

He has slight previous with the man from Sao Paolo as he helped former gym-mate, Jessie Magdaleno prepare for a title defence against the 27 year-old last year, so knows he must be firing on all cylinders come opening bell tomorrow night.

“I was actually Magdaleno’s sparring partner for that fight,” revealed the 2015 World amateur champion.

“I didn’t watch much of the guy (Dos Santos), but I know how dangerous he is because I know how seriously Jessie was taking him and how hard he trained for that fight.

“I know I’m going in with a good puncher who could cause problems, but I just have to be cool, calm and collected.”

There is little fear that Conlan won’t be mentally tuned in for this fight given his own high standards and the fact that he is now guided by master trainer, Adam Booth, who is known for his meticulous preparations.

While Conlan took a lot from his year at The Rock Gym in California, training alongside champions like Magdaleno, working with Booth in London has brought his game on and he intends to deliver a performance befitting the occasion and his preparations tomorrow.

“Adam is a master and he always knows what to do, how to get into your head mentally,” he added.

“I feel like I have an extra confidence and comfort from working with him. When he’s in the changing room, I feel a lot more relaxed so I’m happy he’s my coach and to have him here for this fight, such an important one, is great.”