Conlan: Plans advanced for local stars to get back into the ring 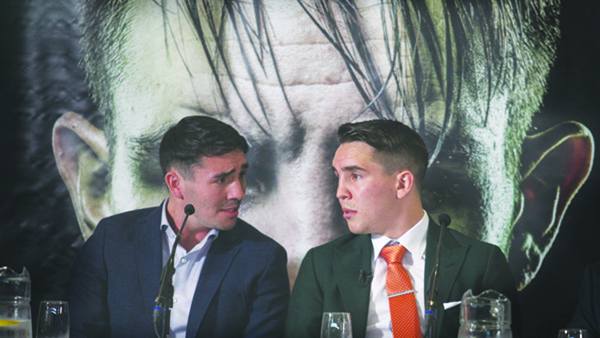 A HOST of local fighters could get their first taste of action since lockdown from next month at MTK Global’s Fight Night events are expected to return from late July.

Initially, the behind closed doors’ shows will take place in England, but MTK Vice-President Jamie Conlan has confirmed that plans to stage later events in Belfast are at an advanced stage with a couple of venues lined up that could successfully host such an event within the government’s guidelines on social distancing.

The British Boxing Board of Control have strict criteria to meet before giving the green light and while many boxes have been ticked, issues remain around shipping outside broadcast equipment with ferries also limiting numbers at present.

However, Conlan is hopeful this can be straightened out before long but for now says the focus is getting fighters back into the ring.

“We have two venues in Belfast who said they will work with us in terms of the guidelines we’ve been given and different instructions,” he confirmed.

“We’ve sent a request to the Board with everything they wanted to be included from the hotels here in terms of a medical standpoint. Everyone seems happy with it, but the one logistical problem we have for here is getting the production company over on a boat.

“We can fly one fighter and a coach over, but the outside broadcast unit needs to be shipped on the boat so that’s a problem for Belfast.

“Initially, we will have a couple of Belfast fighters on shows in England as that is where we will get it started to see how it works and hope to be in Belfast a bit later.”

Sean McComb and Lewis Crocker are expected to be the first local fighters to see action even though they may be forced to travel, while Conlan also confirmed that his younger brother Michael, Carl Frampton and Scotland’s Josh Taylor - all MTK managed and Top Rank promoted fighters - will also see action by early August at the latest with the possibility of all three either appearing separately or on the one show behind closed doors, depending on the demands from broadcasters who will be keen to avoid clashes with rival promotions.

“We are looking at the end of July, the start of August for both of them (Michael Conlan and Frampton) and Josh Taylor,” revealed Jamie.

“We are just waiting on confirmation from the UK promoter and how it will work from a Top Rank standpoint.

“We may do three shows (one each for Conlan, Frampton and Taylor) for Top Rank or perhaps all three could be on the same night.

“A broadcaster will see the upside of having Carl Frampton or Mick on their live broadcast so they will want to make sure this is no clash with another show or Premier League football as it generates more revenue for them too.”

As for the logistics of who can attend, Conlan says those finer points are yet to be ironed out but it is likely only those who really need to be there will be to ensure limited numbers.

That may mean there will be a lack of some of the traditional trappings of professional boxing like a ring announcer, while it is unclear what, if any media, could be permitted in the same hall with Top Rank shows on ESPN next week trialling having commentators in separate studios.

However, the main focus is on the sport’s return and they hope to get confirmation on dates, venues, broadcasters and match-ups in the coming weeks.

“It’s going to be very limited in terms of the numbers who can be in the room,” agreed the former world title challenger.

“I don’t think the British Boxing Board of Control have confirmed that number although ‘50’ had been bandied around.

“It will be limited to who needs to be there. A fighter will maybe have two coaches allowed and then there will be two cut men who will work for everyone.

“There is likely be no ring announcer and we will have to see what way it will works in terms of media and commentators. I spoke with Bob Arum (Top Rank) who aren’t having media for their first few (that take place next week) to see how it can work.”