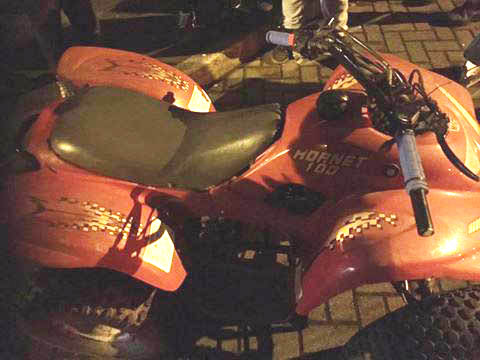 END OF THE ROAD: The quad confiscated after a helicopter chase

THE PSNI helicopter was deployed on Monday night to help officers pursue a quad through the New Lodge and Cliftonville areas as police came down hard on illegal bikes ahead of Christmas.

The chase came to an end on Manor Street with one arrest made and the vehicle seized.

The dramatic chase came as warnings were issued to parents to think twice about buying motor vehicles as Christmas presents for children in areas where they cannot be safely operated.

In the wake of the incident, a PSNI spokesman warned the public about the dangers of the vehicles.

“We received a number of reports of a quad being ridden dangerously in the area of Manor Street and the New Lodge,” he said. “With the help of the helicopter we managed to locate the bike and followed and detained the rider.

“Riding these machines on the roads and pathways at anytime is complete madness. At night in the dark with no lights is nothing more than a death on our roads waiting to happen.

“The quad was seized by police and a teenage boy was taken home to his parents. He is due to be interviewed by the Youth Diversion Officer at a later date.”

Kate Clarke from New Lodge Safer Streets asked parents ahead of Christmas not to buy off-road vehicles for their children.

“We have been having problems with scramblers around the New Lodge with young people racing up and down the streets and alleyways,” she said.

“They are a nuisance and parents should think twice about buying them in built-up areas where there is nowhere to use them in a safe way.”

“Quad bikes and scramblers are not just a nuisance but extremely dangerous both for users and pedestrians in our local communities,” he said.

“The recent tragedy in West Belfast sent shockwaves across the city and demonstrates just how stark the danger is. Sinn Féin has raised this issue at the Assembly and do so regularly with the PSNI and other agencies. I welcome this latest intervention. We have called for action to protect the public and to protect the young people putting themselves at risk on quads and scramblers.

“We have had previous success tackling this issue in the Waterworks but this latest incident at the weekend shows that more work needs to be done.”