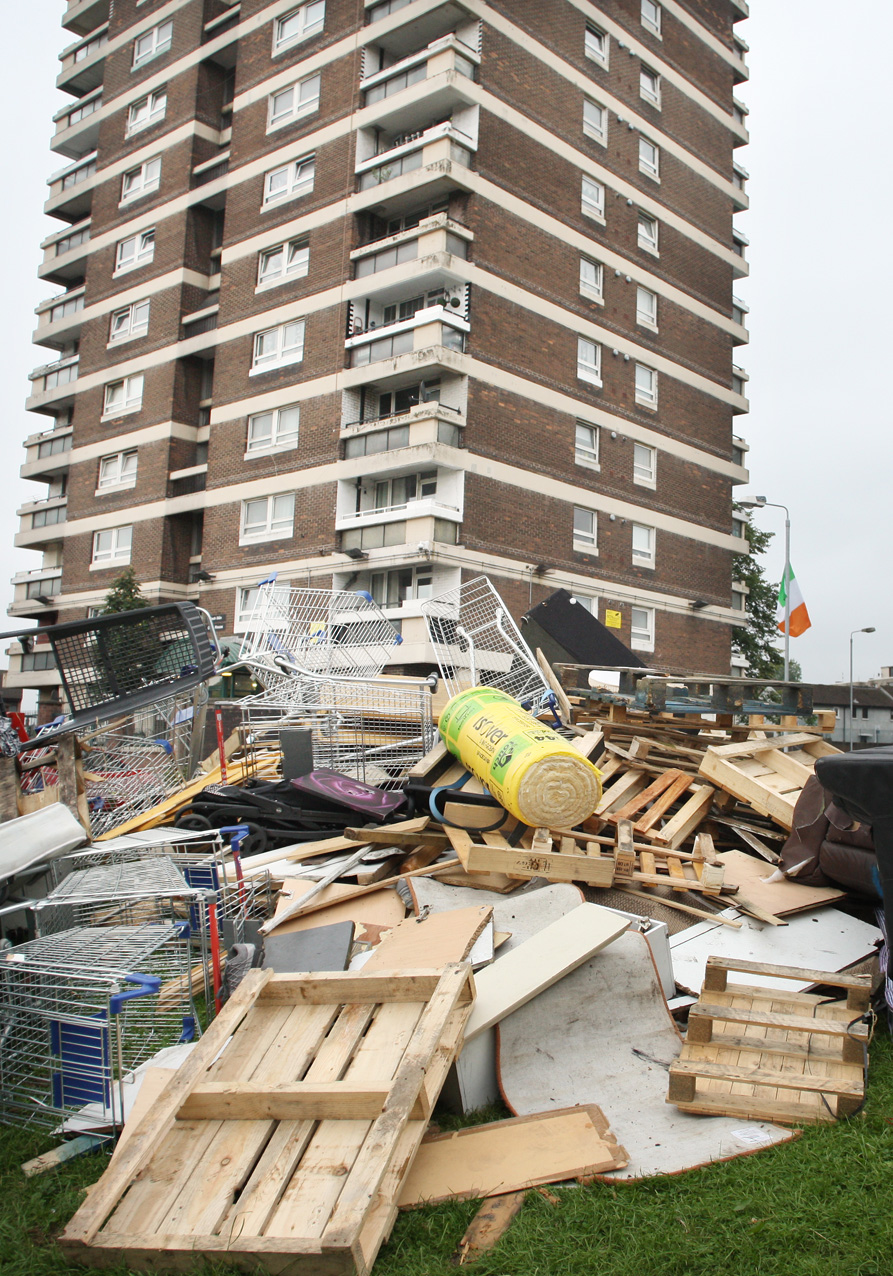 HERE WE GO AGAIN: The unsightly mess at New Lodge flats as bonfire builders began gathering materials in preparation for the planned blaze on August 9

HOPES have been raised that statutory agencies are finally taking steps to deal with the New Lodge August 9 bonfires after years of standing by and letting thugs destroy the area.

This week Housing Executive contractors moved into Victoria Parade and along with Sinn Féin Councillor JJ Magee removed 140 pallets that had been placed on the green.

And on Wednesday night, the PSNI moved in to clear the road after the builders attempted to block it with bonfire material. These actions followed the removal of pallets earlier this month that had been stacked beside Oisín House, creating a fire hazard.

For the past five years residents have been left angry and frustrated as the PSNI watched hoods block Victoria Parade to build the bonfire. That’s despite a survey showing that a large majority of locals are against the pyres.

However, despite these community efforts young people are continuing to appeal for wood for the fire.

JJ told the North Belfast News he would continue to work with the statutory agencies to prevent the annual blaze.

“On Wednesday at the request of this community around 140 pallets intended for an unwanted bonfire were removed by contractors, having been stolen and stored at several sites in the New Lodge area,” he said.

“The small number of those involved in organising for a bonfire and collecting materials is causing huge distress to local residents who are contacting me on a daily basis asking for assistance to have the wood removed.

“I’m appealing to anyone that knows of any other wood being stored to alert political representatives, community leaders and bodies such as the Housing Executive, PSNI and Belfast City Council who we are working with so that we can get it removed.

“On this occasion we have been able to return some of these materials to builders working locally to improve the New Lodge area, from whom it was stolen.

“Those involved in organising these unwanted bonfires have no support from the people of the New Lodge who are suffering from the fall out from these anti-social gatherings including the threat from fires.”

Both the Housing Executive and City Council have told the North Belfast News under certain circumstances they would move in to remove material.

“People will recall the recent incident when stored pallets were set on fire beside homes threatening lives and causing major distress to families,” added JJ.

“The PSNI and Social Services have a responsibility to step up to the mark and deal with the small core of mainly young people involved in this activity. We demand an end to unwanted bonfires wherever they may be in this city and an end to the accompanying dangers, destruction and fear that they bring to a community like here in the New Lodge.”

However, community workers admit they will be involved in a game of cat and mouse until August.

Last year one of the ringleaders told us that they considered the bonfire their “culture”.

“This is our culture and if you don’t like it then don’t come,” he said. “There’s plenty of local people come when it’s lit so I don’t know who these people are complaining. The loyalists built bonfires and get money for them so why shouldn’t we?”