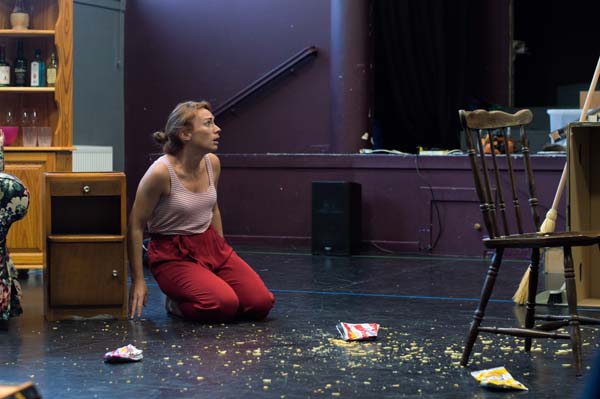 FUELLED by Taytos, gin, 80s anthems and a chainsaw, it’s the Devlin sisters versus the world. It can’t end happily, but it can end gloriously. Fresh from its premiere at the Edinburgh Fringe, Crocodile Fever by Lyric new playwright Meghan Tyler, produced by the Traverse Theatre Company in association with the Lyric, is getting ready to rip up the stage at the Lyric from 3-8 September.
Like Thelma and Louise’s punk daughter, Crocodile Fever is a grotesque black comedy celebrating sisterhood whilst reminding us that the pressure cooker of The Troubles is closer than we imagine.
Northern Ireland, 1989 – a farmhouse window smashes, and rebellious Fianna Devlin crashes back into the life of her pious sister Alannah. Together in the unlovely family home for the first time in years following the death of their tyrannical father, the sisters are back at each other’s throats in seconds. And when Fianna discovers that the old reptile is in fact still very much alive, all hell breaks loose as they confront his hideous legacy.
Crocodile Fever is directed by the Traverse Theatre’s award-winning Gareth Nicholls (Ulster American, Letters to Morrissey). It follows his outrageously entertaining and hugely popular production of Ulster American, written by past Lyric Theatre artist-in-resident, David Ireland.
Crocodile Fever was developed at the Lyric Theatre, with playwright Meghan Tyler chosen for the second year of the New Playwright’s Programme, and then went on to win a place on the Channel 4 Playwrights’ Scheme. The six month scheme at the Lyric nurtures new and emerging playwrights, offering masterclasses, dramaturgical support and signposting for playwrights. In the last three years the Lyric has supported 16 emerging playwrights across Ireland and the UK.
Looking forward to bringing Crocodile Fever to Lyric, Meghan Tyler said: “The Lyric Theatre is home, and I am over the moon that Crocodile Fever will be sparking up such an iconic stage after its run at The Traverse Theatre. Crocodile Fever is a fiery, kickass, ambitious BEAST full of darkly comedic twists and turns. Here we, here we, here we go!”
Rebecca Mairs, Literary Manager for the Lyric Theatre, commented: “Working with Meghan has been an absolute joy. She is an outstanding writer, and supporting her in the development of this utterly brilliant new play has been a real privilege. It’s riotous, it’s fearless, it’s smart, and marks out Meghan as a bold and exciting new homegrown talent to watch.”