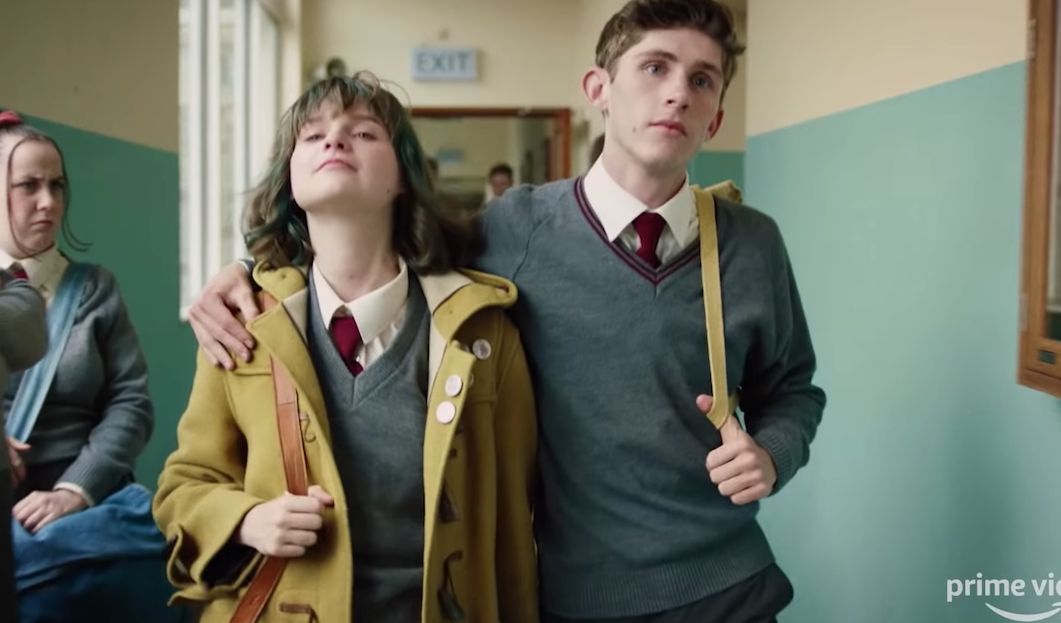 WEST Belfast actress Lola Petticrew’s star is very much in the ascendant, as she tells this reporter how “lightning in a bottle” was captured during her latest work, Amazon Prime’s Dating Amber.

Directed by David Freyne, the film tells the story of Eddie played by Normal People’s Fionn O’Shea and Lola’s Amber, two gay teenagers navigating their way through 1995 closeted Ireland who decide to begin a relationship to put paid to the whispers and jibes about their lack of interest in “shifting” members of the opposite sex.

The former St Dominic’s Grammar School for Girls’ pupil, who was last on the silver screen alongside Derry actress Brónagh Gallagher in A Bump Along The Way; conveys a strong personality aided by her trusty duffel coat, pins, badges and copies of Hot Press waiting for her life to start when she makes the move to the big smoke of London.

DATING AMBER
AMAZON PRIME JUNE 4TH @primevideouk @AltitudeFilms
So excited to share this with you all. Check out me, my best pal @FionnOS and the incredibly talented @SharonHorgan. Under the direction of our SUPER leader @david_freyne . AMBER AND EDDIE 4EVER X 🌈 #datingamber pic.twitter.com/wZVaQH9GnA

“Amber is a teenager in Kildare in 1995 who is gay and in order to stop being taunted, about speculation around her sexuality, she enters a fake relationship with Fionn’s character Eddie who is also closeted and gay,” explained Lola.

“The thing with Amber is not really if she is coming out but when. I think she doesn’t see herself coming out in her small town, but more so when she leaves for London she’ll be out, she’ll be more comfortable and I think she sees that life for herself.

“Amber sees this life for herself more so than Eddie does. He is strangled by this veil of masculinity that he is presenting and which exists around him.”

The film has captured a period in time when VHS tapes were plugged in to teach teenagers, via the nuns, about heterosexual sex education.  Lola spoke of how she and the cast were on set the day marriage equality was passed in the North.

“I remember I was very teary, I remember thinking ‘gosh, this is almost 25 years later’ and this is only passing now. I think now, socially, we still have a long way to go. People may think it’s easy to come out now, it might be easier, but it’s by no means easy, maybe a bit more so in the North than in the South.”

When asked about showing Dating Amber in post primary schools as a means of educating young adults Lola replied: “That casual homophobia is still something that is so prevalent in school. We hear kids drop the ‘f’ word like it doesn’t mean anything at all. What we tried to show in the school setting in the film is that the kids that are saying these things, they aren’t bad kids. What they say has a massive affect and it’s hurtful. A lot of the time the kids that do those things aren’t malicious and that’s really what the problem is. The fact that we don’t talk about sexuality like that at all in schools is disgraceful when you consider the lasting affect it has on people.”

She continued: “We started filming a year ago last week and it was just the most enjoyable experience. I always say it was a bit like lightning in a bottle. Me and Fionn became best friends straight away, we are in isolation together at the minute. Dave, our writer/director, was just the most incredibly open, and giving man who created an atmosphere of joy, of love and everybody brought their ‘A’ game as everyone really cared about the story.

“Being in lockdown, it’s been really lovely for me and Fionn to spend time together but I miss my dog Mattie whose back at home, I miss the day-to-day stuff just being able to go home to my mam and sitting on the sofa and have a cup of tea.”

A theatre actor as well as television and cinema, Lola spoke of the “open dialogue” around finding a way forward for the return to the stage.

“It’s so interesting as I’ve seen loads of stuff on Twitter and it’s obviously a real open dialogue at the minute trying to figure out what it is we are going to do. People have relied so heavily on artists during lockdown. It’s funny that people don’t see artists as essential – I don’t think you can’t say that artists are not essential unless you’ve spent the last three months staring at the wall and I don’t think anyone has.

“It’s really hard for a lot of people to see where their work is going to come from. I know personally that my theatre friends are strong, they adapt and overcome so I’m certain that we will find a way.”

The BIFTA nominated actress will appear on our screens come the autumn in the BBC’s latest crime drama Bloodlands alongside Jimmy Nesbitt as well as two more feature films, Here Are The Young and post-apocalyptic thriller Shadows. When asked for advice for those wanting to pursue a career as an actor Lola simply said: “I always just say go for it.”

“You regret the decisions that you don’t make way more than the ones that you do. There is an entire group of people out there that will support you in that decision, you just have to find them.”

Lola said that she will be returning home and continuing the rest of her isolation in West Belfast.

“I miss home so much, I’m just going to go up and stay with my mum and dad for the rest of it. I just want to go and squeeze them and I’m looking forward to going back.”

Happy Pride! 🏳️‍🌈
The latest #GirlsOnFilm is a #DatingAmber special - here's a snippet of star @LolaPetticrew in conversation with @annasmithjourno