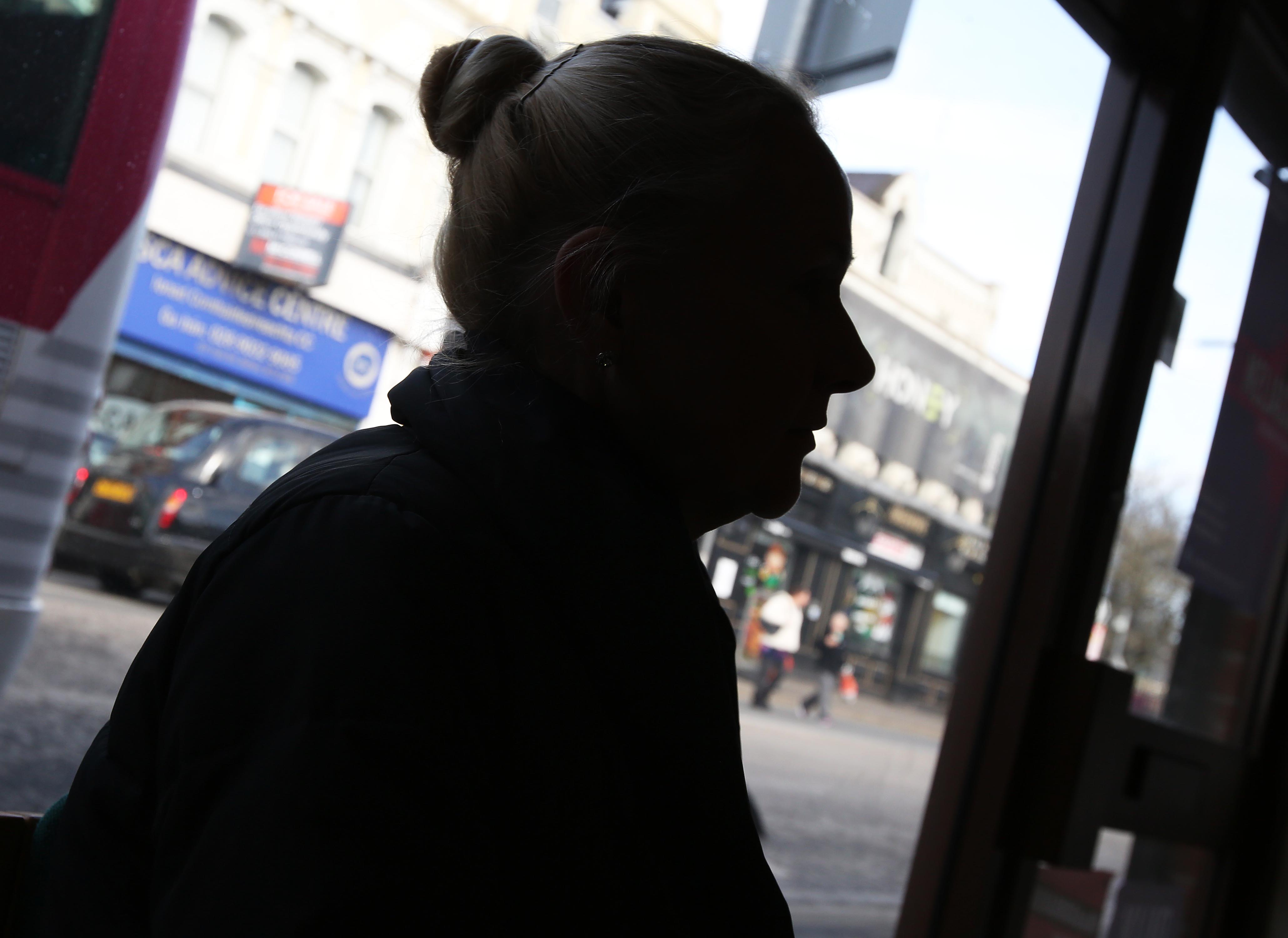 CONCERN: The distraught woman speaking to our reporter this week on the Falls Road

A WEST Belfast mum has described her father’s living conditions as a “breach of health and safety”.
The woman, who does not wish to be named to protect her father’s identity, was speaking out after the doors to the bins and laundry room of her father’s Ardnaclowney House residence in Beechmount were first locked by the housing provider at 2pm on a Friday and not re-opened until 9am on a Monday morning.
Ardnaclowney House provides sheltered apartments for people over 60. However, the new regulations means that residents can’t wash clothes over the weekend or empty rubbish from their homes.
Speaking to the Andersonstown News the woman said her father has complex health issues.
“I normally would have done my father’s laundry in the evenings but the laundry room is closed from 5pm now. I am unable to bring it home with me so now his washing is building up. There have been times when I have put a wash on before I’ve gone to work, but if I don’t get back in time then his clothes are left lying in the washing machine overnight.
“I work myself and I have my own family to look after as well. My daughter has Crohn’s Disease so bringing my daddy’s washing home with me isn’t an option.
“I’m sure we aren’t the only family upset by this. My father also has to use pads, it is totally unacceptable and extremely unhygienic to expect my father to have pads in his bin from Friday afternoon until Monday morning, it’s not right, there’s no dignity. People can’t be expected to live like this.”
The distraught woman added: “It’s not fair that I’m unable to get the washing done and the rubbish out. We aren’t on our own here and what about the poor residents who have no family – what are they meant to do?”
People Before Profit MLA Gerry Carroll said: “Residents and their families at Ardnaclowney House are being denied access to an essential service here. What is the rationale for residents having restricted access to laundry rooms for elderly and in some cases sick people?
“We have contacted Habinteg Housing Association several times to raise these concerns and whilst there was some change initially, the unacceptable practice of closing the laundry room to residents and their families at evenings and weekends still persists.
“Residents are paying rent to live at this home, why should people have to wait almost three days over the weekend before they have access to laundry services or the bins?
“I am calling on these restricted hours to be immediately rescinded.”
A spokesperson for Habinteg Housing Association said: “We are sorry to hear that the recent changes to laundry room usage at Ardnaclowney House has brought about inconvenience for any of our tenants. Limiting access to daytime hours was not a change that we wanted to make but has been forced upon us, sadly, by the abuse of the facilities.
“The laundry room, the adjacent bin store and recycling facilities have increasingly been misused, with the Council refusing to make waste collections due to the extent of inappropriate dumping of materials, leading to a risk of vermin and infestation.
“Our own staff members, additional cleaning personnel and private contractors have been repeatedly called upon to clear the area and until we can appropriately separate access to the bin store from the laundry service, we have been forced to restrict and manage access.
“We anticipate the current situation will be a temporary measure and, in the meantime, we have notified residents that we are happy to discuss alternative arrangements where there are specific requirements.”