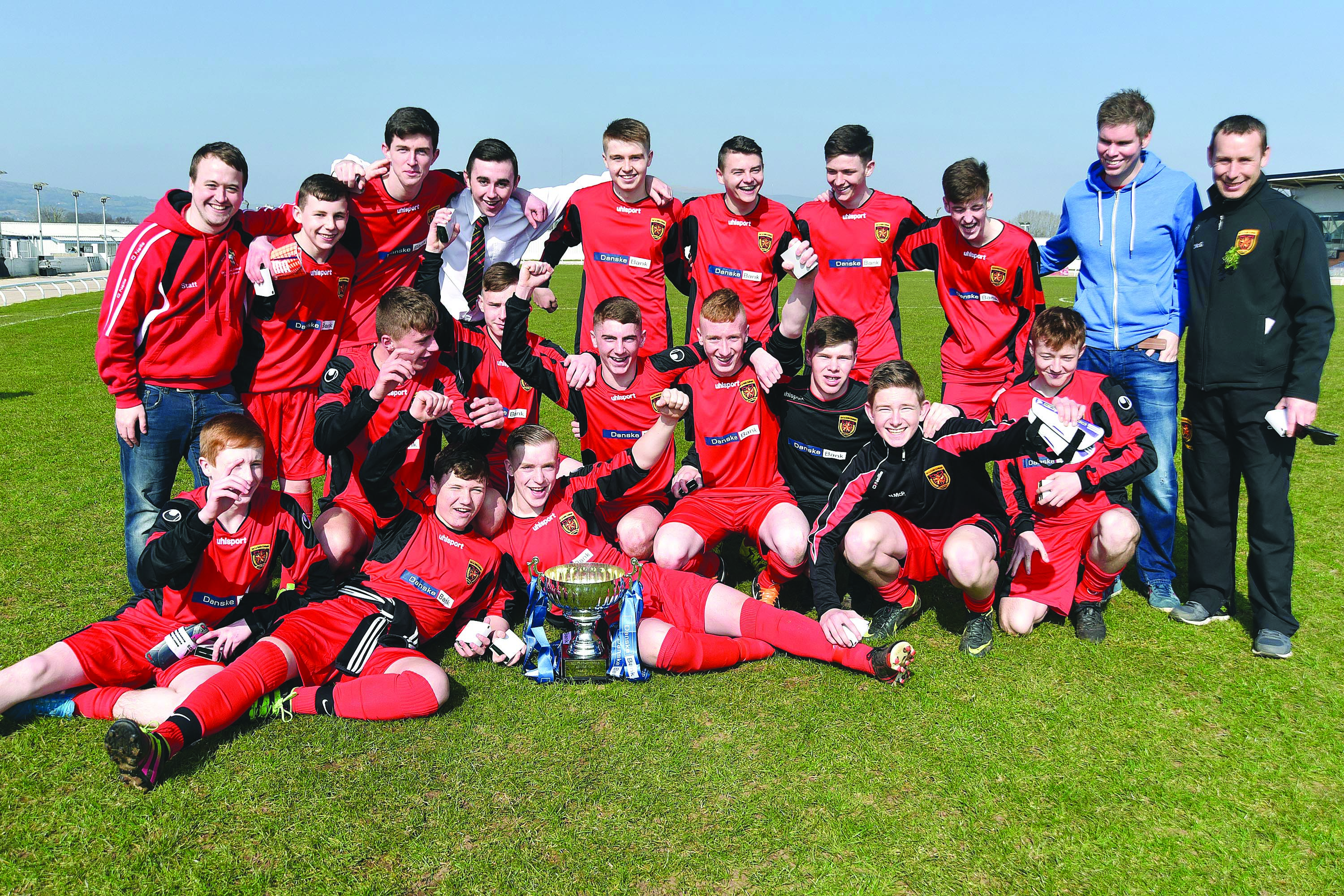 First half goals from Donal Rocks and Declan Dunne within the opening 15 minutes had De La Salle well in control and a third from Nathan Rocks sealed the win despite Conor McCullough heading home from Paddy Burns’ free-kick and goal scorer Fox receiving a second-yellow card for a goal saving tackle in injury-time.

De La Salle coach Thomas McGilligan admitted he surprised by the winning margin and felt his side’s second-half display fell short of what he expected.

“It was a good victory and to win by two goals in a cup final is very unusual,” reflected McGilligan. “We’re maybe a wee bit disappointed in the our second half performance. I thought we could have had more opportunities but St Malachy’s will be very disappointed as well.

“They had a couple of close shaves when we were doing the wrong things and giving fouls away in the dangerous areas and it nearly cost us.” McGilligan was full of praise for scorer of the second goal, Declan Dunne who crossed the ball which led to Rocks opening the scoring and McGilligan revealed that the centre-forward is quite versatile in where he can play.

“Declan is probably a very different centre forward from the type you will see in most schools competitions or other competitions,” said McGilligan. “Traditionally he is a goalkeeper but he has talents and his eye for goal is unquestionable. Sometimes we think he goes for the too difficult type of shot, but today he brought the ball down nicely and he put it away.”

McGilligan didn’t criticise scorer of the third goal, Nathan Fox who was dismissed in injury-time for a second bookable offence and felt that it was a tackle that needed to be made with St Malachy’s pushing hard for a second goal. “It’s one of those tackles that probably most coaches will tell you have to be done,” admitted McGilligan.

“It was a difficult time of the game. We gave the ball away stupidly and lost possession when we had it and that ball shouldn’t have had to be fought for in that way. It’s a tackle that as I can see it and I’m sure most other coaches would recognise that it had to be made. It’s unfortunate it led to a red-card.”

De La Salle has been in the headlines for all the wrong reasons of late but McGilligan praised the team for their successful result.

“The school has took a battering and hopefully things can improve,” said McGilligan. “I can’t say and awful lot about the situation. Today was not about anything that was going on within the school or maybe not be going on, today was about a game of football with a talented bunch of players and they’ve had a successful result.”

Meanwhile, St Malachy’s coach Tommy O’Neill admitted he was very disappointed for his players and thought the two early goals killed the game off for his side. “It was disappointing more for the lads,” reflected O’Neill.

“Possibly the nerves contributed to the slow start,” said O’Neill. “We had worked this week in training on the game plan and we didn’t really get the ball out of our feet to utilise that. “The game plan was to play diagonals and get the ball in from wide areas because the pitch is bumpy. De La Salle pressed us high and we just couldn’t get going at all.”

O’Neill was a bit disappointed that his side couldn’t kick on after Conor McCullough scrambled the ball home from Paddy Burns’ in-swinging free-kick, but credited De La Salle for a deserved victory. “Paddy [Burns] put a great cross in and we were able to capitalise on it,” said O’Neill. “But again it was too little too late and we should have pushed on from there.

“We had a couple of chances and didn’t take them. Credit to De La Salle where it’s due, they had their game plan, they stuck to their guns and they came out winners deservedly so.”