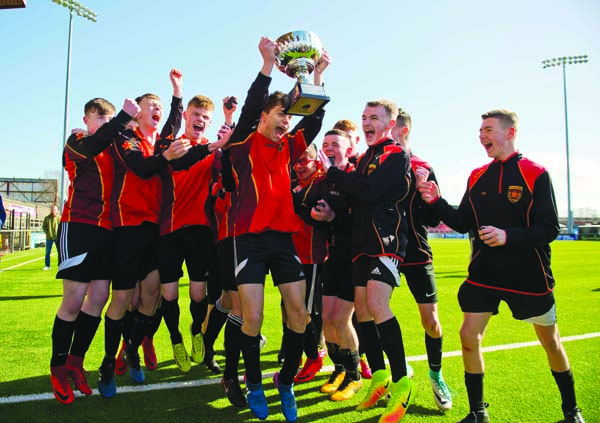 De La Salle capt Calvin McCurry celebrates with his team after their victory over Edmund Rice during the u16 schools cup final at Seaview stadium in North Belfast. Picture Mark Marlow

DE La Salle bid to add the NI Schools Cup (U16) to their Belfast Schools’ Cup title when they take on St Columb’s College Derry at the Ballymena Showgrounds tomorrow (Wednesday).
The Edenmore Drive side defeated Edmund Rice College 4-0 in the Belfast decider last month and they will be hoping for another strong performance when they take on the Derry men.
Team captain Calvin McCurry, who scored the last of his side’s four goals at Seaview last time out, says confidence remains high in the camp following their Belfast Schools’ Cup exploits last month.
“We beat a strong St Malachy’s team 2-1 in the (Belfast Schools’ Cup) semi-final and we had a really hard game against them,” reflected McCurry.
“That set us up well for the final and we won 4-0 against Edmund Rice.
“It was a great victory and a great team performance by us.
“There was a bit of nerves before the final, but when the music and everything started up, we flew out of the traps and hit them hard. We were 4-0 up at half-time.
“It is brilliant to get the school back winning cups. There was a bit of a gap to our last win.
“To win the Belfast Schools Cup was massive for the school and we want to go on and win the NI Schools Cup now.”
A brace from Bailey Carroll and a strike from Dylan Maguire preceded McCurry’s goal as La Salle ran away with the Belfast final.
They previously defeated Portadown College (2-1) and Enniskillen Royal (3-0) in the earlier rounds of the NI Schools’ competition.
However, they will face formidable opposition in the form of St Columb’s tomorrow morning/afternoon.
The Derry outfit hit four goals in their wins over St Michael’s Enniskillen (4-1) and St Malachy’s (4-2) and McCurry is expecting a tough game.
“It will be another hard game – they are a very good team,” added the De La Salle skipper.
“They are always difficult to play against. They will be a good, strong, physical team and we will have to play really well against them.
“It will all come down to whoever wants it more on the day.”
Those sentiments were echoed by manager Stephen Killyleagh, who is hoping his side put their best foot forward in tomorrow’s decider.
“I am really looking forward to the showpiece final,” said Mr Killyleagh.
“Winning Belfast was a great achievement and now playing in the NI Schools Final is a bonus.
“I just hope the boys go out and do themselves justice and, if they do, they’ll have a good chance.
“St Columb’s will be a strong team and they are synonymous with success in NI Schools soccer.”