Death not Shrouded in mystery 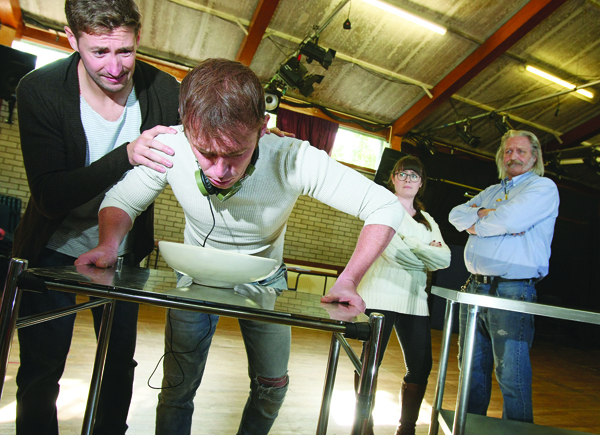 AN HILARIOUS new comedy about a not-so-funny subject is set to take to the stage next month.

Three’s A Shroud, written by Stephen Large, lifts the lid on the funeral business and promises to provide plenty of laughs for theatre-goers when it opens at the Waterfront Hall on October 4.

For generations Catholic undertakers in Belfast have buried Catholics and Protestant undertakers have buried Protestants. However, when veteran undertaker, Gerry McSorley, finds his Catholic customers being stolen by young Protestant rival, Basil Gray, an undertaker war breaks out. It gets worse when Polish woman, Irena Bukowski’s cut-price new age, interdenominational funeral home usurps them both.

Directed by West Belfast’s very own Martin Lynch and produced by GBL Productions, Three’s A Shroud is brought to life by a fabulous cast.

“The relationship between my character and Gerry McSorley is quite interesting,” says Matthew. “Simon wants to be a rapper, he has no interest in dead bodies, but that doesn’t stop him from trying to bring Gerry’s business into the twenty first century by putting ads on social media.

“He tries to introduce an app that allows you to track your loved ones, almost like tracking a pizza. He also tries to get Mr McSorley to live stream funeral services.”

The cast are currently in rehearals and things are going well.

Matthew added: “Six days a week rehearsing when you’ve only three weeks before the play starts really isn’t very long. We are going to be flat out, but like anything else if you rehearse it enough times it’ll sink in.”

The cast and crew took to the city centre last week where they carried a real coffin, followed by a hearse.

“PJ Brown’s from the Falls Road loaned us a hearse and a coffin, we can’t thank them enough, it really brought the play to life – pardon the pun,” laughed Matthew. “Their help and generously was greatly appreciated by us all.

“We were walking around Corn Market carrying a coffin and we did a wee bit for a video which we will be putting out shortly, it was a great experience.”

Although death is a subject that makes us uncomfortable, Three’s A Shroud tells the funny side of something that none of us will be a stranger to.

“When we were in Corn Market with the coffin and hearse a lot of people came over enquiring if it was a real funeral. Some people were blessing themselves, people were offering their condolences, we felt a bit bad,” said Matthew.

“But you know what people from this part of the world are like, we can’t take ourselves seriously for too long and we always end up having great craic at wakes and funerals.

“The subject of death is handled very well in the play. There are a few poignant scenes but it’s mostly a barrel of laughs. You do get to see the emotions of the characters throughout the course of the play as well as a few wee shockers.”