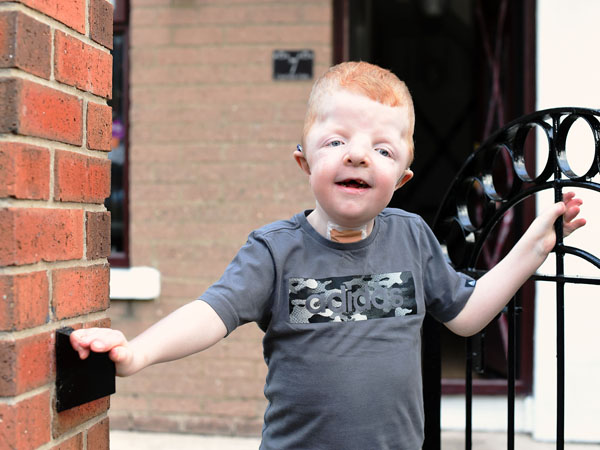 PROGRESS: Dáire and mum Colette are looking forward to doing things as a family they couldn’t before

THERE were emotional scenes last week as brave Turf Lodge boy Dáire Flanagan took another massive step forward by having the tracheotomy that he’s worn for almost all of his life removed.
For seven years and ten days Dáire, who was born with a rare genetic condition known as Apert Syndrome, lived with his ‘tracky’, making it difficult for him to do things that other children take for granted.
Speaking to the Andersonstown News in her West Belfast home, Dáire’s delighted mum Colette explained the process by which the big change came about. “Dáire went into hospital for a sleep study and he did so well that they downsized him (gave him a smaller tube) the next day,” she said. “They did a further sleep study that night and were so amazed at how well he was coping that they kept the tracky off, meaning he had to use his upper airways. They kept it off him all day and monitored him through the night and that was him.
“Then on the Wednesday they got Dáire to take the tube out himself. It was such an emotional moment, one we will never forget, I couldn’t stop crying, Dáire started crying as well. I think he was just so overwhelmed, all the doctors and nurses were crowded round the door watching him.”
When asked how he felt about having his tracky out Dáire said: “Really good and happy.”
Colette says that she will have to keep a close eye on Dáire for the next six to eight weeks, but now, after seven years, they can walk out the front door without having to bring bulky equipment with them.
She continued: “This is a new world for us, Dáire had the tracky put in just before his second birthday and he’s going to be nine in two weeks. We won’t have to carry his suction machine, oxygen, tracky box and bagging set, that will make a world of difference to us. All I have to do now is take my son by the hand and walk out the front door.”
Colette says that the family are looking forward to a number of firsts.
“Dáire has never had a sleepover or been swimming, my family have never been able to look after him on their own because they would have needed to be trained in tracky suction and CPR but that’s gone now. He’s going to be able to stay with his aunts or go out for the day with his cousins. I haven’t stopped smiling – and crying! I was able to bath him last night and wash his neck without worrying about bandages and I was able to kiss his wee neck, it’s things like this you take for granted.
“After at least 150 tube changes, not including the emergency changes when the children pulled it and it got blocked, tens of thousands of suctions, at least 10,000 nebs (nebulisers), countless sleepless nights, not to mention hospital admissions and infections, Dáire will now have so much more independence, this little tube has kept our boy alive but now he’s strong enough to breathe without it.”