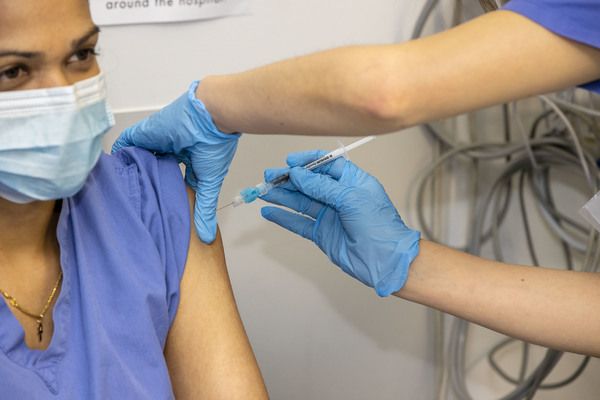 VACCINE ROLLOUT: Nithya Rajendran of St James Hospital, Dublin, was one of the first healthcare workers to be vaccinated against COVID-19. Marc O'Sullivan, Rollingnews.ie

As we end the Christmas holidays, there is no sign of the pandemic receding with cases rising above 600 cases per 100,000 and bed occupancies in hospitals nearing 100 per cent.

Indeed there is evidence that the holidays have contributed to the spread, making the Transfer Tests this Saturday a worry (and one would like to see the epidemiological advice on the proposal).

Of course, when we raise eyebrows at this bait and switch decision — promise one thing then change course after first dose has been delivered — we are really querying whether the real problem is in the supply chain - there just aren't enough does available so we are having to make-do.

Our ‘light at the end of the tunnel’ has been faltering with no indication yet of the rolling out in Belfast of the promised vaccine but we are told that 30 selected (by whom and on what criteria?) practices will get vaccine today.

According to health chiefs, patients at risk from age (some 82,000 including those in our care homes) and morbidities will be contacted first.

With government pulling back on the two-dose policy for which it was approved, there are real doubts that the pharmaceutical company in Wrexham which is filling the vials under sub-contract from Belgium, where it is made, does not have the capacity to prepare two million vials per week — let alone the five million which Tony Blair has been calling for.

Little is being said about the success or otherwise of the Pfizer vaccine which was launched before Christmas with a demanding cold chain but there are rumours of vials wasted at £15.70 each as sufficient patients were apparently not lined up for some of the vials which had been defrosted.

Now we are being told that Pfizer BionTech are not happy with the dosage schedule being extended to 12 weeks for the second dose, it being argued that it is better to have a greater number 40 per cent protected than a lesser number protected 70 per cent, not the schedule on which approval was sought. However, today the BMA is threatening legal action to force the government to stick to the approved regimen and fulfilling the promise made to those who have received the first shot. Of course, when we raise eyebrows at this approach — promise one thing then change course after first dose has been delivered — we are really querying whether the real problem is in the supply chain - there just aren't enough doses available so we are having to make-do.

There are apparently 50,000 doses in the North and with a projected distribution of 10,000 per week in will be a long time to achieve population immunity.

The Assembly has approved an additional list of vaccinators to augment the practice nurses who usually do this sort of work for GPs and this was to include vets and retired doctors. Some colleagues put their names forward only to be told that they would have to complete 21 forms on their previous training and undertake a further 20 hours training (presumably 10 hours on each arm).

I have given similar injections from the cardiac ambulance in darkened coal houses in west Belfast and in the bright sunshine of west Africa, so I think I would be well-able to help without the faceless interference of those who seem to know little about medical education and even less about systemic pandemics.

A final issue is, is this the right vaccine or just the one that Boris bought and has been promoting?

The response of our immune system is important particularly with the new variants. Does the vaccine produce antibodies which protect the eyes, nose and mouth (reducing spread, now in the young) but the jury is still out on that question.

The European Medical Agency has only approved the Pfizer vaccine and the Moderna vaccine of Maryland is seeking approval of the Federal Food and Drugs Administration in the USA.

The Russian Sputnik V vaccine is being adopted in some south American countries, including Argentina. The Chinese vaccine Sinovax is credited with reducing infections in Wuhan City and there is now an Indian vaccine.

There was a similar debate about polio vaccine but most of us just take what is offered. When the final story comes to be written about this pandemic we should ask how many decisions were taken in this pandemic for socio-political reasons and was the balance right with the clinical epidemiology of what we knew about the disease?

Even in a pandemic some politicians just continue to pursue their own agendas no matter the cost and we should remember them at election time.