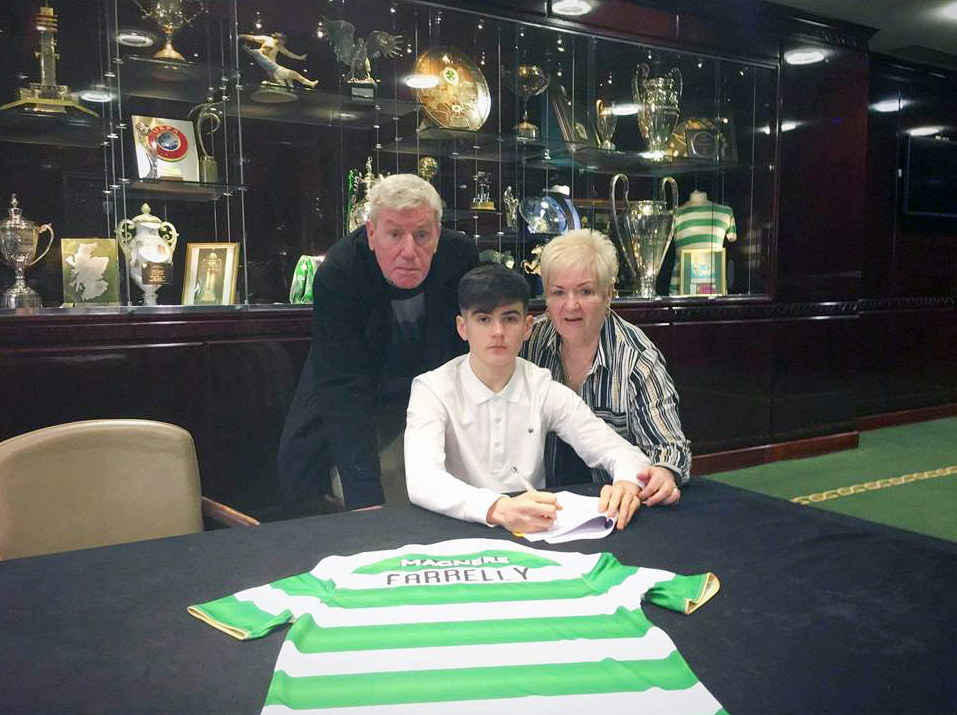 NAME ON THE SHIRT: Connor with his grandparents Rosaleen and Eamon Henry signing for Celtic in the Parkhead trophy room

A YOUNG West Belfast footballer is living the dream after signing for Glasgow Celtic.

Having started playing for Willowbank FC as a youngster, the fifteen-year-old has progressed immensely over the years. The Corpus Christi College pupil has represented Northern Ireland on the international stage and had also attracted attention from other clubs such as Birmingham City and Ipswich Town before being snapped up by the Hoops.

“He was really exited,” she enthused.

“He had a good chat with Brendan Rodgers [Celtic manager] and some of the players so he’s so buzzing and I’m so happy for him."

“The boys and the managers at the club are all delighted for him too.”

Like any mother, Martine will, of course, miss her son when heads off to Glasgow on July 1.

“I will definitely miss him but it is only 25 minutes on the plane,” she said.

“I’m really glad for him and it is a great opportunity.”

Many young people dream of playing professional football, but not many have the will or the talent. She added that Connor got to where he is today with sheer determination.

“Connor was never the strongest of players initially,” she said. “He had to work to get where he is.

“There were sometimes players better than him when he was younger, but he was always a goal-scorer. We would always tell him to keep working and that it would come to him, and his hard work has really paid off.”