Drugs campaign moves to next phase 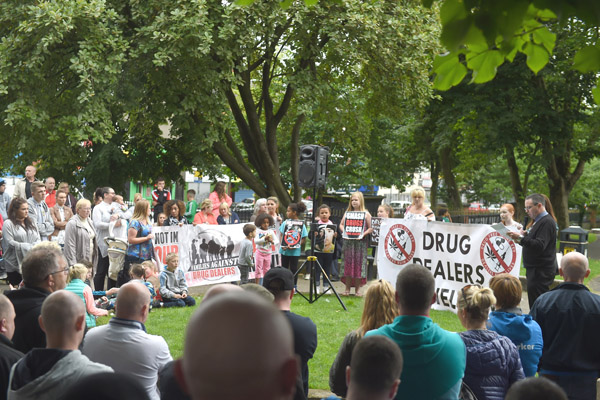 NEXT STEP: Hundreds gathered in the Waterworks for an anti-drugs rally – campaigners will now begin a fight for adequate addiction services

A community drugs campaign launched last month in the Waterworks

with a mass rally is to campaign for a dedicated treatment centre for addicts.

At a meeting held last week it was agreed that a petition would be started to make the authorities confront the growing problem in North Belfast.

Over the summer heroin dealers started to use the popular park to deal drugs leading to a backlash from the community.

Christina Sloan, who spoke at the rally, said they were now putting plans in place to hold the authorities to account.

“After the rally we asked anyone who was interested in helping out to give us their contact details and we will be getting in touch with them in the coming weeks to outline our plans,” she said.

“We have started an online petition for a drug treatment centre which is badly needed in Belfast. We will also be rapping doors to ask people to sign the petition. We want the authorities to realise there is a problem out there and we need help.”

Last Wednesday’s meeting was attended by at least one mother who lost her child to a heroin addiction.

Christina said there was growing evidence that the impact on ordinary people was increasing.

“We need the PSNI to crack down on the dealers but we badly need treatment centres for people who are already hooked. There has been a number of families bereaved though drug addiction and we need the heath authorities to put more money into treatment. This is only a start for us and we plan more events in the future but through the petition we want to show people we are moving forward with the campaign.”

Police allege that Maris Ludborzs was found with ten wraps of heroin with an estimated street value of £250 in his body with Andrius Medzius possessing the same amount in his underwear.

The men were arrested following an operation in the park on Tuesday evening (August 23). Latvian national Ludborzs (40) of Broadway, Belfast, was granted bail after agreeing to surrender his passport and provide a £1,000 cash surety.

Medzius (45), who is originally from Lithuania, was remanded in custody after his barrister said he planned to plead guilty.

Both men will appear in court again next month.

The online petition is available via www.ipetitions.com.