DÚLRA: A golfing birdie with a difference 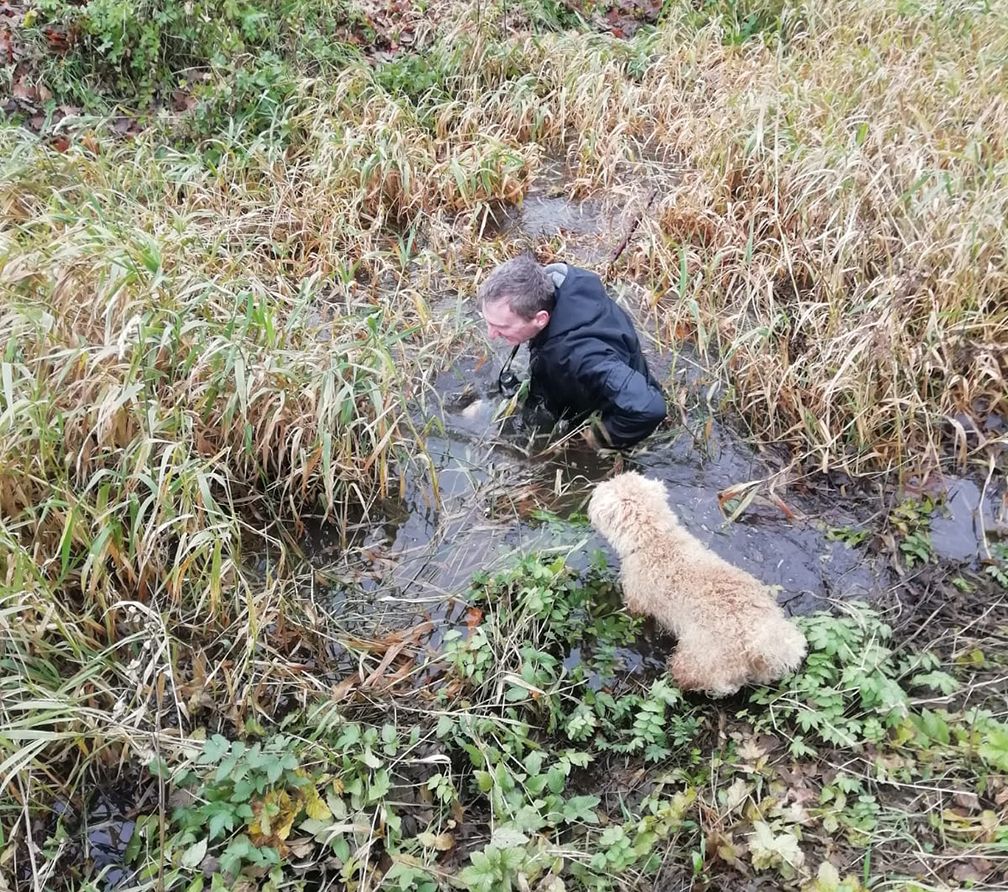 SLIP: One of the perils of birdwatching is not looking where you’re going, as Dúlra found to his cost during a visit to South Antrim this week

One minute he was happily admiring the wonders of nature around the perimeter of Hilton Golf Course near Templepatrick, and then suddenly he was chest deep in water!

When golfers talk about a water hazard, at least now he knows what they mean!
The problem is that when most people wisely have their eyes on the ground when they’re walking, bird-watching Dúlra’s head is in the air.

So if anything’s to blame for him taking a bath, it’s the beautiful buzzard that he was keeping an eye on at the time.

Dúlra heard from a golfing pal that the giant raptor is always in the trees near the 14th hole. And sure enough, right on cue, there it was, perched on a branch like an ornament overlooking the green.

It doesn’t need to work hard for a meal here – just keep an eye out for one of the many rabbits – and by killing them, the birds are doing the greenkeeper a favour.

The golf course here sits amid classic south Antrim countryside, bordered by the Six Mile Water river which runs from Carrickfergus to Antrim.

The golf course gives nature some respite – agriculture is pre-eminent in the surrounding countryside and in the last decade even the hedgerows have been butchered into tiny rectangles, destroying the winter harvest of haw berries that have fed winter-visiting thrushes from Scandinavia for hundreds of years.

Six Mile Water, to Dúlra at least, an unusual sight because it must be one of the few rivers that doesn’t have trees on its banks – instead the sheep-filled fields stretch right down to the water. Its old Irish name – Abhainn na bhFiadh, River of the Wood – hints at a different past.

The giant trees that adorn the golf club – many oaks and including one of the oldest hazels Dúlra has ever seen – act like an oasis to animals and birds.

It wasn’t just the buzzard that was impressive – Dúlra focused his bins on two male bullfinches preening themselves in a glade. At one stage a flock of long-tailed tits and treecreepers – who knew they’d be mates? – magically appeared. They danced close to Dúlra’s head, the treecreepers’ whirling call like a druidic chant. It was like being transported 500 years into the past amid the ancient forests of Ulster.

But that’s all a distraction – what you really want to hear is how Dúlra ended up in such an embarrassing state. Well, the ground in the photograph looks solid enough, doesn’t it? There’s thick foliage covering the water, isn’t there?

Just moments before his fall from grace, the buzzard took off and flew directly overhead. Dúlra manoeuvred to get a better look and realised his right leg was sinking into water. A second later and the waterboot was full. He tried to raise it but wet mud held it like a vice – and so the second leg had to go in as well.

He finally got out and emptied the boots. But walking back to the car, he felt like a character from a cartoon as each footstep was accompanied by a loud squelch.

Next time he visits he’ll swap the waterboots for a pair of waders!

l If you’ve seen or photographed anything interesting, or have any nature questions, you can text Dúlra on 07801 41404. (And those readers who did send Dúlra pictures last week, they’ll need to resend them – because his phone is waterlogged!)