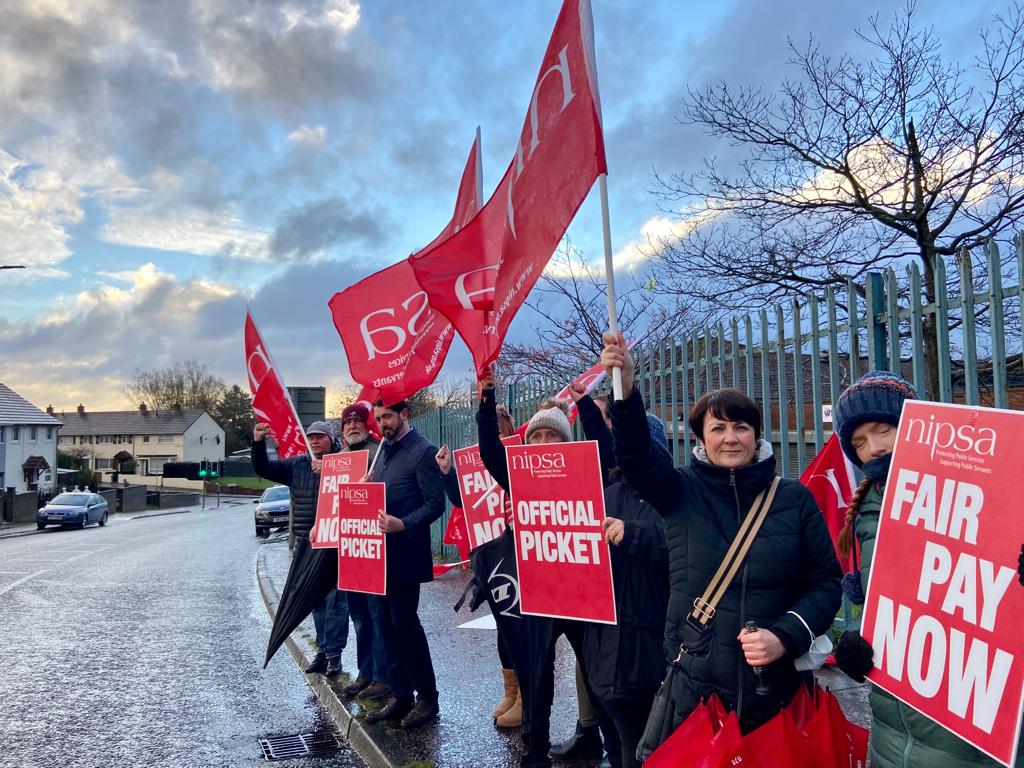 TAKING A STAND: Education Welfare Officers on the picket line outside Whiterock Library

EDUCATION Welfare Officers based at Whiterock Library took strike action on Wednesday as part of a long-running wage dispute with the Education Authority.

The social workers, who are members of the trade union NIPSA, are paid £5,000 less than their colleagues in the health service.

On Wednesday morning, the Education Welfare Officers held a picket outside Whiterock Library where they joined by representatives from the SDLP and People Before Profit.

"We're getting paid £5,000 less than our counterparts in health for doing the same job," she said.

"We have launched our pay claim over two years and the Education Authority have not negotiated with us in any meaningful manner. Our members' mandate is very clear and we're standing firm, we're standing together and we're saying enough is enough – pay us what we deserve."

She said pay disparity was having an impact on staff recruitment and retention, which is causing "soaring" waiting lists for "the most vulnerable children in our society."

"All of those children are waiting on our list for a service that they should be receiving and they're not."

NIPSA's Acting Assistant Secretary, Alan Law, said: "There are huge waiting lists and that are causing issues across the region. One of the reasons there is a huge waiting list is because there is not enough staff. When you have one employer offering a £5,000 higher salary then it's not rocket science, people are going to go to the employment area with a higher wage.

"Staff in the Education Authority will work 10 years to reach the starting point of the health service salary. It's hardly surprising that there's a deficit in staffing."

He added: "This is an easy matter to fix, and we believe the Education Authority should have the will to resolve it."

People Before Profit MLA Gerry Carroll said: "It's completely unfair that these workers, who have worked throughout Covid looking after the most vulnerable and marginalised people, are forced to take strike action."

"What they deserve is to be paid fairly for that. Currently they're being paid £5,000 less than other workers doing a similar job. It's not about pitting some workers against others – everybody should be paid what they're owed for the work they do.

"Unfortunately the Education Authority and Education Minister haven't budged so these workers have been forced to take action. Fair play to them for taking that action.

SDLP representative, Paul Doherty, said: "These Education Welfare Officers are working hard, and they're working beyond their means, and they need to receive support.

We need to see pay parity as soon as possible. This has been going on for too long, and we need to see more than words. We need to see a collective of parties here in the North coming together and trying to push to see this resolved."

Wednesday's strike is part of a 15-day strike action that is taking place at workplaces across the North.