OPINION - ELLY ODHIAMBO: Why Arlene needs to see the value of language 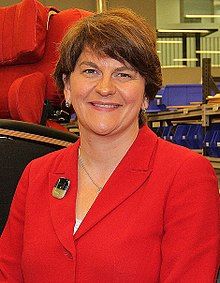 I MAKE no apologies about what i will say in the next sentence. Corporate leadership in any sector should be driven by a bit of empathy, not bombastic bragging. Yes, corporate entities are there to make profit, that is the baseline, but there comes a point when the means to the end is much more important than the end itself.

I attended a job interview (I hope they read this because I mean this.) Why would they brag to a person seeking employment that they have landed a ten-year nearly two billion sterling contract from the government so they could provide service to very needy individuals? If only employers could look themselves in the mirror before they utter insensitive quips about the profiles of their companies.

The 18th century German philosopher Immanuel Kant was the founding father of the project known as the categorical imperative of the ends and means. But these are not philosophies owned by the old, white, Western males of the 18th century.

There was nothing special about these models of thinking; in fact, humans were experiencing appalling events then, slavery was still at its peak and wars were raging everywhere. The same humans, the world over had a degree of empathy and treating of their fellows as an end in it/themselves, respecting their dignity and seeing it as a social imperative too.

Language is very important. Africa has over 2,500 languages. In this digital age, a survey of languages in Africa would probably indicate an increase in new localised lingua used by the younger generation. In Nairobi, such a concoction of new spoken youth codes of speaking is called ‘sheng’, it is a mixture of corrupted Swahili, English, mother-language and, to be honest, sheng speakers believe it is genuine, relevant, authentic and funky. It is not an add-on to any existing prominent languages. When people move to Nairobi, in order to survive the daily slang encounters, they will gradually learn some sheng.

During one of the recent election campaign trails, the First Minister  Arlene Foster said: “We will never accede to an Irish Language Act. It amazes me that people cannot see how [Sinn Féin] are using the Irish language as a tool to beat Unionism over the head. And never mind that, but the cost that would be incurred, in terms of the Irish language, would be quite incredible. And all for a tiny minority of people who choose to speak the language, of course they’re entirely entitled to do so. But if we have an Irish Language Act, maybe we should have a Polish Language Act as well.”

Mrs Forster implied directly following this speech that there are more Polish language speakers than people who speak Irish in Northern Ireland. Of course, this is not a statistical declaration and can be contested even by face value.

I believe that language – Irish, English, Ulster-Scots, Mandarin, Urdu and the hundreds of distinct African languages here – are very important and a great blessing for the community in Ireland.

Politicians on both sides of the cultural divide should seize the opportunity and take the metaphorical long view of the giraffe. When it comes to the sensitivities of language and language barriers, there is no high table, respect of identity is coded by language rights on all sides.

I’m ashamed now to admit that I allowed the hatred & bitterness of those who have nothing positive to offer Northern Ireland to make me doubt, even for a moment my involvement with this wonderful initiative https://t.co/I3Y5Xyox9R