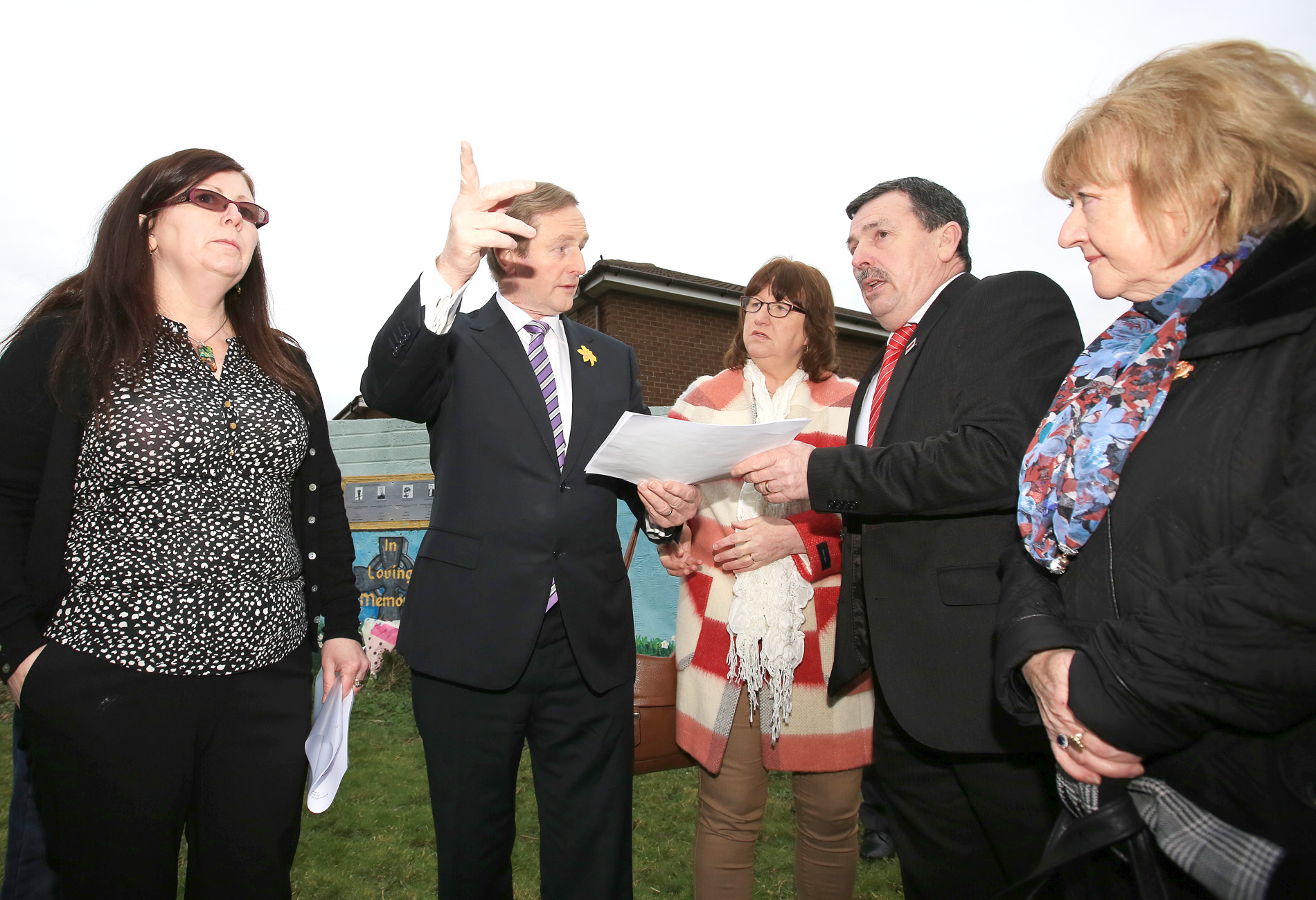 TAOISEACH Enda Kenny laid a bouquet of flowers at a memorial plaque to victims of the Ballymurphy Massacre on an early morning visit to West Belfast today.

Mr Kenny was greeted by Ballymurphy families spokesperson John Teggart as the Taoiseach took time to listen to relatives whose loved ones where shot and killed by the Parachute Regiment in August, 1971.

Mr Kenny had previously met the Ballymurphy families in the Dáil in January 2014 but this was the first time he has visited the ‘Manse’ site on the Springfield Road – the epicentre of the British army rampage.

Speaking to Belfast Daily, Janet Donnelly said she felt it was important for the Taoiseach to see up close how the bloody events had unfolded and for him to learn of developments since he last met them.

“We want to talk to the Taoiseach about the new evidence that has come to light since we last spoke to him,” she said. “There has been new evidence about my daddy, Joseph Murphy, and the fact his body is to be exhumed. There’s the evidence about Mrs Connolly and the fact she was left to bleed to death where she fell – had Mrs Connolly been brought to the hospital for medical attention she could have been saved. We want to bring to the Taoiseach’s attention the quashing of the conviction of Terry Laverty’s brother John of riotous behaviour on August 11 1971 as there are now plans to have the solider at the centre of the case questioned on allegations of perjury.

“We want Enda Kenny to see how close to their homes and each other our loved ones were when they were shot and killed. We want him to get the feel of what happened here in Ballymurphy and how we live with that day in day out.”

West Belfast MP Paul Maskey said: “I think it is very important that the Taoiseach has come up, come into West Belfast, into Ballymurphy, today. The families have been lobbying the Irish government for a long time and I’ve been with them in the Dáil while they have stated their case for justice.

“I think this is a positive step that Enda Kenny is here today to listen and see exactly where the family members died. It’s putting a personal touch to the campaign and it’s a step in the right direction for the Ballymurphy Massacre Families.

“They have to be commended for all of their efforts in keeping the pressure on the Irish and British governments in their quest for truth. Today is a good day for them.”