Experts lay it on the line at Stormont Health Cttee: If you have all-island policy to protect animals, why not humans? 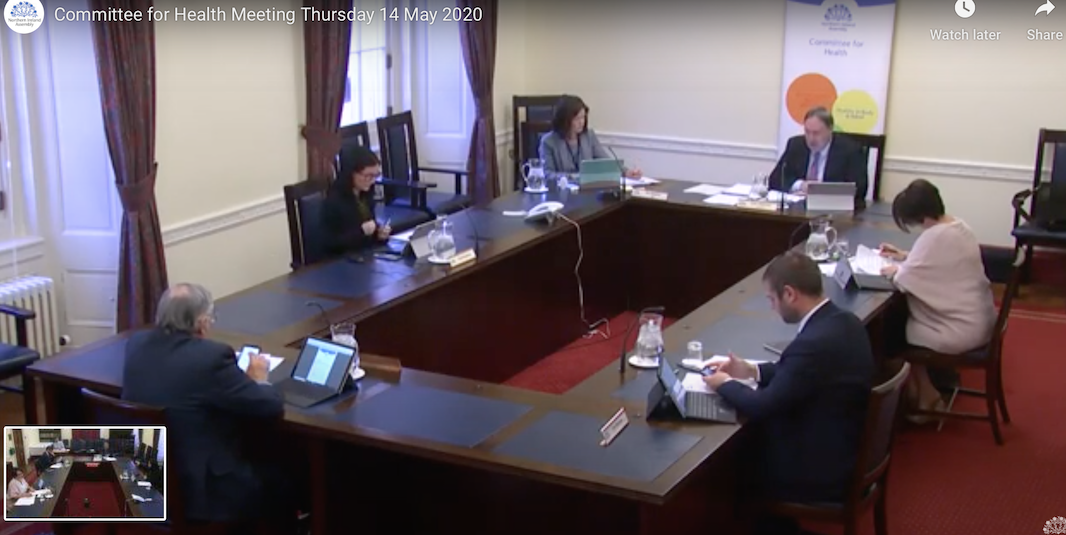 Against the background of the Chief Scientist calculating R from minimal data for every scenario on Nolan (would you buy wine which might be 7.9. then 4.9 and not less than 1.00 no matter how young  or the calculator?), the Health Committee met at Stormont yesterday to hear from real experts.

Firstly, Sian Griffiths from Oxford who had been involved in controlling Sars 1 in Hong Kong in 2003, then Tony Costello Professor of Global Health at UCL and finally the formidable Martin McKee of LSHTM, Professor of European Public Health and once of Madrid Street.

Griffiths had taken home messages from Sars 1. The need for surveillance, public health approaches and the need for capacity in the health service to cope with any surge in cases. Given reports she could not understand the lack of preparedness especially in personal protection equipment.  McKee said R had to be <1 to reduce quarantine and face coverings were needed.

He stated that this was a complex multisystem disease and that doctors working in vertical silos should share information about treament  with antivirals, protecting endothelial tissues and mitigating hyperimmune  responses.

Tony Costello outlined the timeline of the pandemic and focused on 12 March when the UK SAGE group recommended that community testing and tracing should stop. Sir David Kingformer CSO set up independent SAGE, two of whom were present. Prof. Sir David Spiegelhalter (Cambridge) had calculated rates per million, 841 for UK and 4 for New Zealand. Sian Griffiths stressed the need for strong public health and testing capacity. 14 day quarantine had been important.

#COVID19 no more respects timelines than it respects borders.

Any change in strategy depends upon having the other measures in place including; transmission under control, care homes & similar settings protected, health service capacity in place, PPE stocks, testing & tracing. https://t.co/qoQr1OpZrs

When asked about all-island policy Martin McKee said there was for animals and why not for humans where we could be as successful as New Zealand. He also referred to institutional amplifiers such as care homes, prisons and cruise liners.

The funding of WHO was discussed and the approach of USA was decried. Difficulty in calculating R was discussed - but not difficult for Young.

Alex Easton DUP asked about actual deaths. Orlaith Flynn SF asked about co-ordinating with the Republic in regard to clusters at the border. Mike Ryan of WHO was praised. Pat Sheehan of SF asked about best public health practice and the effect of Brexit and how the decision on 12 March was not correct.

Martin McKee went back to BSE (in 2001) and how Baroness Denton had wanted an all-Ireland approach. Easton was unhappy that Independent SAGE may have interfered with official SAGE. Martin McKee found that suggestion offensive.


Next up was RQIA, the body which inspects our care homes, in the shape of Dermott Parsons, Director of Assurance and interim Chief Executive. He was unable to give much assurance to Colin McGrath SDLP. There seems to be a few interim CEO’s in the sector. The Committee heard last week from interim CEO of PHA, Olive MacLeod, who had recently moved from RQIA.

The committee were left with the impression that inspecting care homes and Muckamore  Abbey Hospital, in order to prevent Covid-19 deaths, did not loom large after guidance from Chief Medical Officer Dr McBride CMO — or indeed before it.

The committee would send written questions as they were not satisfied with some of the testimony.

In closing Pat Sheehan was not happy with the apology of Alex Easton having been caught by the BBC ordering new boots, presumably, for marching with someone during permitted exercise.

However, the committee were happy to meet with the Dail Covid-19 committee now that we are all in the single market and to meet the Minister and CMO next Wednesday for a rematch.