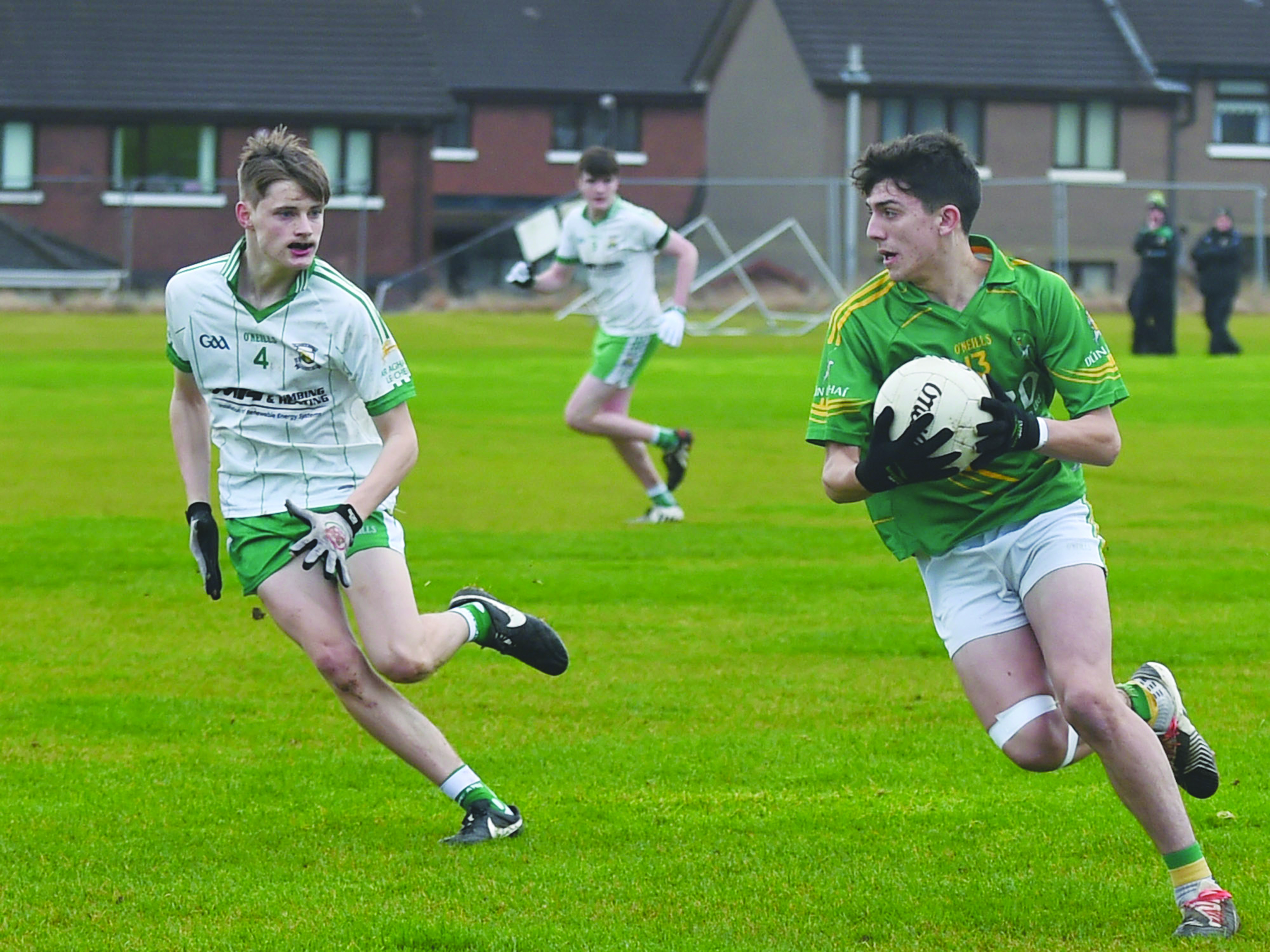 BURREN advanced into the semi-final of this year's St Paul's-hosted Ulster Minor Football Tournament as the Down champions produced a strong finish to edge out Dunloy in an entertaining game at Rossa Park on Sunday.

For long spells there was little between these teams, but it was the St Mary's side that had that little bit extra going forward to take the scores that ultimately decided this quarter-final. It was a fine hour of football that was played at a good pace throughout with both sides giving their all with some great fielding and defending on show, while both made countless blocks and interceptions to highlight the desire from both throughout.

Dunloy will certainly feel this is a game they could well have won and just seconds into the game, they could have had a goal when the pacey Sean Elliott read the flight of a long ball perfectly and his momentum took him clear but the low shot shaved the outside of the left post. Despite this let-off, Burren were slow to settle and Dunloy continued to dominate, but couldn't engineer the scores their play merited.

Instead, it was the Down club who hit the front on four minutes from their first foray into Dunloy territory when Declan Murdock converted a free. The Antrim champions hit back immediately with Conal Gunning kicking a free over, but Burren were now beginning to grow into the game and they were back in front when Thomas Travers picked out Liam Kerr on the left and the wing-forward produced an expert finish off his left boot.

The game went 10 minutes without a score despite some good approach play from both until Dunloy's Anthony Smith made a good catch and fired over, but again it was Burren - playing into a slight breeze in the opening period - who had the answer with Conor McCartan kicking over after winning a breaking ball.

Declan Murdock then kicked a great score after doing well to escape the clutches of the Dunloy defence and then it was the turn of Shay Murdock to kick a fine score from distance to make it 0-5 to 0-2 after 24 minutes. Dunloy were on the back foot, but they did have the final say of the opening period with Gunning kicking a free to narrow Burren's lead at the break to two - 0-5 to 0-3.

It looked as though the Mournemen would push on after the break with the breeze at their backs, but Dunloy came flying out of the blocks in the second period with the impressive Keelan Molloy winning the throw-in and racing forward to score.

A Declan Murdock free restored Burren's two point advantage, but the tide was now beginning to turn and after a Molloy free reduced the arrears to one.

From the restart, a stray pass intercepted by Cathair McGuigan saw the Dunloy captain tie the game on 44 minutes and it seemed as though they were on course to push on.

Four minutes later and the Cuchullain's took the lead for the first time when Gunning kicked his third free of the day to make it 0-7 to 0-6, but this would prove to be their last score of the game.

Burren steadied and after some patient build-up play, Shea Fitzpatrick took a great crossfield pass from Liam Kerr on the left and floated over a beauty to tie the game with 10 to play. The game was very much in the melting pot, but the Down side just had that little bit extra and it was they who were now driving forward. Declan Murdock kicked a free to restore their advantage and he repeated the trick on 55 minutes to move the Down side two ahead once again.

Dunloy were now pushing forward knowing a goal was required, but from a turnover, Liam Kerr raced forward, evading several challenges and kicked the insurance score. Dunloy did try to find the goal that would level the match, but the door was shut and a couple of floated frees were cleared as Burren held on for the win the probably deserved to book a semi-final meeting with Enniskillen Gaels this Sunday.