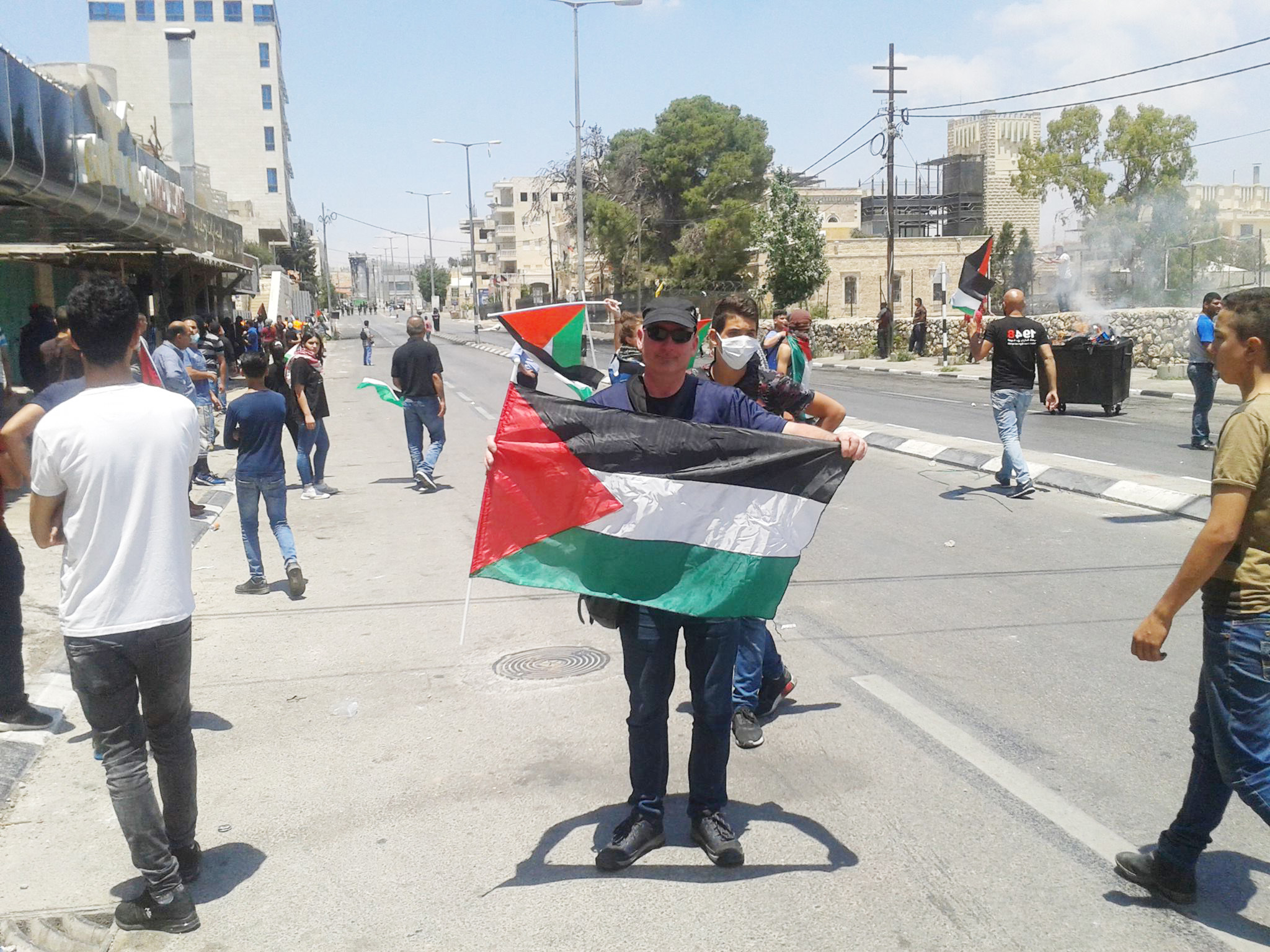 UP CLOSE: Fra Hughes at the protest near Bethlehem during a week of violence

A NORTH Belfast activist who is currently taking part in demonstrations in Palestine has described how “peaceful protests” were “violently suppressed” in the West Bank.
Ardoyne man Fra Hughes has been in Palestine the week to mark the 70th anniversary of the Nakba, or Catastrophe, when Palestinians were forced from their homes by Israelis.
On Monday, over 60 Palestinians were murdered and thousands more injured by Israeli Defence Forces (IDF) during protests in Gaza.
Fra, who has been involved in protests at the Israeli separation wall in the West Bank, said that protestors near Bethlehem were attacked “without provocation”.
“There was a march of about 350 people,” he said. “I was at the front of the march with a banner and my camera and when we got within about 100 metres, without provocation or warning – this was a peaceful demonstration – the Israelis opened up with tear gas. The tear gas canisters are fired like rocket projectiles from the top of a jeep. They fire about 30 of them in the space of 45 seconds. There are three levels, in terms of height, they fire some of them at about 30 feet up, some at 20 feet up, and the third is at head height – they’re like torpedoes and they can kill. As far as I’m concerned, peaceful demonstrations took place to mark the Nakba and to protest against the ongoing slaughter in Gaza, and they were violently suppressed.
“Yesterday, I saw four people injured. If you talk to people here they are saying that they believe the IDF are being instructed not to use live rounds because of the backlash caused by what happened in Gaza. They don’t want it happening in the West Bank. They’re trying to blame Hamas in Gaza, but they don’t have that excuse here.
“The price Palestinians are paying should remind the world of the daily ongoing Nakba, and they’re paying for it with their lives.”
Amal Wahdan, a friend of Fra’s from the West Bank, said she believes that protests will continue for the foreseeable future.
“People here are really outraged by the Israeli occupation and the reaction of the US and the Arab regimes,” she said. “People are not ready to stop their demonstrations and marches and it will continue. In the West Bank there are demonstrations at every junction with the settlements, every junction with the military. The situation will continue to be tense.
“The situation in Gaza is escalating after the death toll rose to 62, and there were two people also killed in the West Bank.The tension is rising, and the tension demands that the Palestinian Authority takes a decisive action by abolishing the Oslo Agreement, and cutting relations with the US and the EU.
“We demand that these governments take further action against this apartheid, fascist regime. The support that Israel is getting from other countries in Europe and the US is making people very angry. We don’t trust that they are working in our interests. We are frustrated by the Arab regimes also – people are not satisfied with their actions.
“BDS is driving them crazy, but we want diplomatic and political sanctions as well. When this apartheid regime feels that it is isolated by the whole world, then it gives them some success to think that their policies are not getting them anywhere. The west is giving them a free hand to do whatever they want to the Palestinians until we achieve freedom, and when I say freedom I don’t just mean for the West Bank and Gaza, I mean freedom for people all over Palestine, because our brothers and sisters all over Palestine are facing the same vicious policies, the same discrimination, the same apartheid as we do here.”