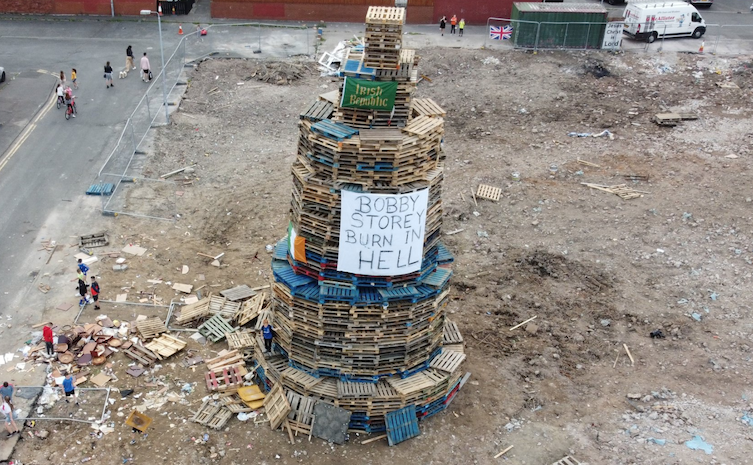 Police were attacked in short-lived disturbances in the North Queen Street area last night in what was the second consecutive night of trouble sparked by the erection of a Twelfth bonfire at the Duncairn Gardens peace line. Nationalist youths threw petrol bombs at police who were deployed in the area late last night and remained in the district into the early morning.

Local councillor JJ Magee, who was on the scene, said the streets were quiet again by 12:45am.  "It was minor stuff and ended pretty quickly," said the Sinn Féin man. "Sadly, we predicted that building a bonfire at Adam Street, right on the Duncairn Gardens peace line, for the first time in nine years, would raise tensions and it did. For the past two months, we have been appealing to the police to ensure the removal of the bonfire and asking unionist politicians to intervene but our pleas fell on deaf ears."

Least the t**gs will get a good view of the bonfire from their flats 🇬🇧 pic.twitter.com/6VL1tbQYS4

"A handful" of youths from the nationalist New Lodge were involved in the rioting, said Cllr Magee who was pelted with eggs when he told the youth to disperse.

Cllr Magee called the fire brigade when he feared a nearby chemist would be damaged by the bonfire flames.  "They fire service came out and doused down the premises to prevent damage," he said.  "It's my hope that efforts can be made now to rebuild good relations between the New Lodge and Tigers Bay which have been disrupted by a small minority who want to stoke tensions."

Department for Communities Minister Carál Ní Chuilín took a judicial review of the PSNI decision not to have the bonfire removed with the case being heard yesterday (Saturday) in the High Court.

Disgusting to see the image regarding Bobby Storey in East Belfast. This is a difficult time for his family & friends as they are dealing with his loss. This is unacceptable, we all need to stand united against it and those involved need to remove it.

SDLP North Belfast councillor Paul McCusker called on parents to ensure their children were not involved in disturbances at the North Queen Street interface. Speaking after Friday night's trouble, he condemned "aggressors from both sides of the community".

"My plea to parents is to make sure that your son or daughter does not go near any interfaces as we need help to reassure residents and relieve tensions," he said. "If it continues, young people face the risk of a criminal record and a future where they may not be able to travel or access jobs of their choice, for being involved in something that no one supports and will achieve absolutely nothing. Please stop this nonsense."

Sectarian and racist banners and placards were placed on bonfires across the North with Sinn Féin elected representatives reporting many to the PSNI as hate crimes. There was particular anger over an East Belfast placard referring to republican leader Bobby Storey who died last month.

West Belfast MP Paul Maskey called on unionist politicians to speak out against "a series of blatant and unacceptable displays of sectarian hatred on bonfires yet again".

He said "it is absolutely disgraceful" that the grief of Mr Storey's family is being "compounded by sectarian thugs".

Once again we see the hate filled displays at 11th night bonfires + the erecting of unwanted flags in mixed areas, this further creates divisions between our communities &
All community leaders & political reps should be calling this out for what it is #SUAS pic.twitter.com/Wcu4eYDj6u