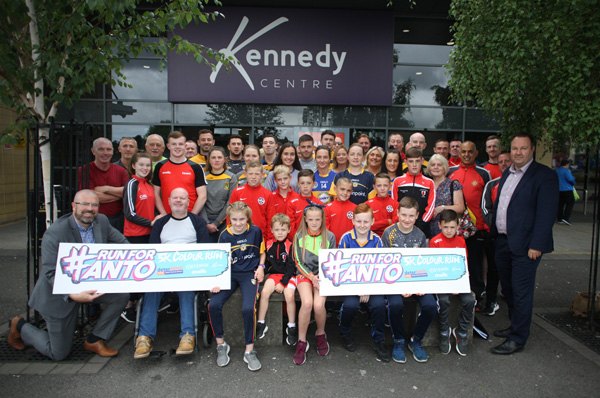 THE Falls Park is set to be awash with colour on Sunday, September 23 as Antrim GAA hosts a 5k colour run in aid of deterMND, the charity set up by former football captain Anto Finnegan.
The run will see participants cross the finish line wearing all the colours of the rainbow while raising some much-needed funds for motor neurone disease (MND).
Anyone connected with Gaelic games in Antrim and beyond will know that legendary former captain Anto was diagnosed with the neurological condition MND in August 2012.
Anto has taken on the challenge with the same strength and courage he displayed so often on the pitch, setting up support charity deterMND to try and help others who have also been affected by the condition.
“We’ve had fantastic support since we established the Trust, from Antrim in particular, O’Neills and a number of other businesses on the road,” said Anto at Saturday’s launch in the O’Neills store in the Kennedy Centre.
“Again, this event has shown the support we have received from them and, from our point of view, it reinforces our decision to establish the Trust and go public with everything.”
The event is the brainchild of Antrim PRO Sean Kelly and Anto says he was only too happy to give it his backing when the idea was floated.
“This all came from Sean,” he added.
“He contacted us this year and said he would like to do something that was family-orientated and would fit within that Antrim family, something everybody is able to take part in.
“He mentioned the colour run and we saw an event like that in the Falls Park recently so we thought that it would really work. We gave Sean our blessing and to be fair to him, he has got on with it.
“Up to this point we’ve only played a small role, but it’s a great partnership and I’m not surprised it’s taken on a life of its own.
“For people interested in taking part in this, my message would be to get registered early because it can’t be an infinite number of people taking part.
“We’ll have to draw the line at something so that just shows the support the community has given us and we are delighted with that.”