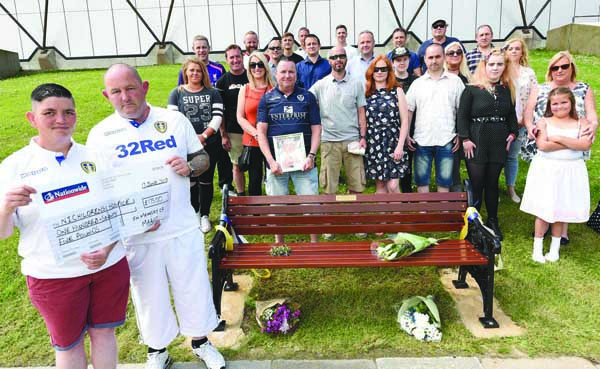 MEMORIES: Sarah and Lyndon Hemingway with friends of Mark Hemingway at the Valley Centre bench unveiling in memory of their brother Mark

A SPECIAL bench has been unveiled at Valley Leisure Centre in Newtownabbey by friends and family in memory of a Yorkshire man who loved playing football there.

Mark Hemingway passed away suddenly from pneumonia on Christmas Day in 2015. The 43-year-old worked as a boiler and gas engineer and first came to the north in July 2010.

Martin Rooney, who knew Mark since he arrived from Yorkshire, paid tribute to his close friend, who was known affectionately as ‘Marco’.

“Mark was a neighbour of mine, ever since he first came to Northern Ireland,” he explained.

“As I got to know him, I found out he was a Leeds fan, like myself, and I invited him to play football at the Valley. He absolutely loved it and all the guys grew very fond of him from the off – despite bruised elbows and ankles at the end of every match, thanks to Mark.

“Mark was such a popular guy. He had so many friends and a loving partner in Michelle Hughes. He is sorely missed. He was a real character and one of the funniest people you could meet. You just enjoyed his company. His death was a huge shock to everyone. Mark had complained of feeling unwell before he passed away and had even planned to make an appointment with his doctor after Christmas.”

Martin, who played football with Mark every Sunday morning, decided he wanted to do something in memory of his close friend.

“At the funeral, we decided to do a collection to raise money. We knew we wanted to do something in memory of him and came up with the idea of a bench at the Valley where we all enjoyed so many hours playing football together. We contacted the Valley and they kindly gave us permission for a bench, close to the 3G pitch where we played with Mark.”

On Saturday past, Mark’s close family and friends, including his sister Sarah and brother John, who travelled over from Yorkshire, gathered at Valley Leisure Centre for the unveiling of the bench.

“It was a very emotional occasion. Some members of Mark’s family helped cut the tape,” added Martin.

“There was a good crowd and it was a fitting way to remember Mark. My friend, Kevin, who helped organise this with me made a nice speech and I think his kind words about Mark really hit home to everyone there.

“Of the money left over from our fundraising to purchase the bench, we decided to donate the remaining £175 to the NI Children’s Hospice, in his name which is just another little piece of Mark’s enduring legacy.”