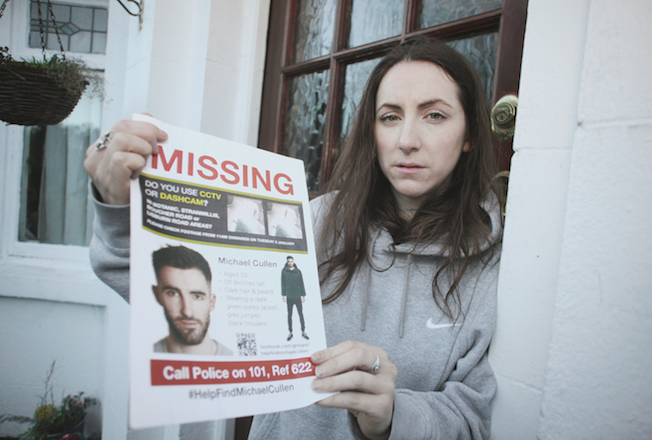 STAYING POSITIVE: Catherine Cullen is appealing for information about her brother Michael

THE sister of missing North Belfast man Michael Cullen says her family are ‘distraught’ with no positive news of his whereabout over the past fortnight.
Catherine Cullen was speaking to the North Belfast News, two weeks after the 33-year-old was reported missing from his North Circular Road home on Tuesday, January 9.
“There are still searches taking place in Cavehill and in South Belfast in the Lisburn and Boucher Road areas,” she explained.
“We are still appealing for CCTV and dashcam footage from members of the public and businesses in the South Belfast area from 1pm onwards on the day Michael went missing.
“Police need one sighting of him in order to be able to track his movements on what happened that day.
“We also know that phone technology placed Michael in the South Belfast area between 2-3pm.”
The Cullen family have been supported by a number of sporting stars in recent times, including boxers Carl Frampton and Paddy Barnes and recently-crowned Masters champion Mark Allen.
A ‘Help Find Michael Cullen’ Facebook page has also helped raise over £10,000 to assist in the search, support Catherine admits has been ‘overwhelming’.
“The public support so far has been phenomenal. As a family, we are really overwhelmed.
“The Facebook page has been really busy with people wanting to help the search or volunteer to distribute flyers.
“We can’t thank members of the public enough who have helped put up posters throughout busy areas in order to raise awareness and get Michael’s face and profile out there.
“We are trying to stay strong and positive because I don’t really know how else you would get through a situation like this. It’s been really tough.
“Everyone has had their ups and downs but we are all really distraught about the whole thing and just hope that Michael is okay.
“We are thinking about him 24/7 and just hope there is some good news soon.
“I would appeal to anyone who knows any information to contact the police, on 101 and quote reference number 622 09/01/18 or if they prefer they can contact the Community Search and Rescue team (CRS) on 07711 233802.”