Family of desperately ill little Leo bowled over by generosity 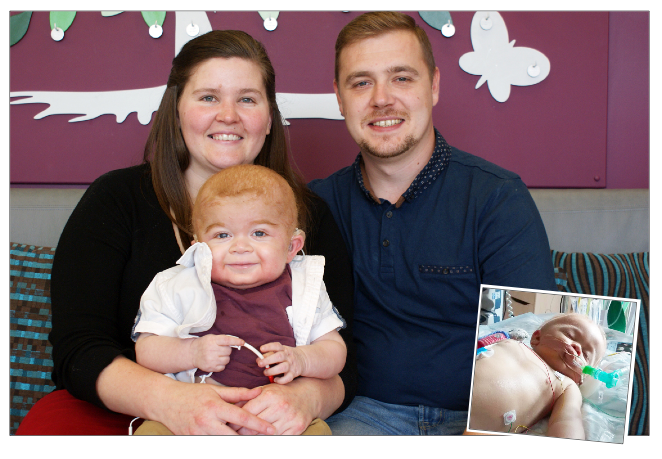 The father of a little Belfast boy born with a life-threatening genetic condition has paid tribute to the community’s support for the family who have been living in a Manchester hospital since January.

Mark McKnight’s son Leo, who is 17 months old, has been receiving life-saving treatment in Manchester for a rare genetic condition called Hurlers syndrome, which prevents the body from making an important enzyme and causes severe damage to internal organs. The family have been told his life expectancy is just 10 years.

In January this year Poleglass man Mark and his partner Eva Johnson packed up and relocated to Manchester where doctors have been treating the little boy.

Over the past four months the family have been told Leo would die on three separate occasions but the “little fighter” has battled through despite gruelling treatment that has included chemotherapy, a bone marrow transplant and on one occasion 12 platelet transfusions in one day.

Mark said despite their desperate worry for their little son the family have been comforted by the amazing support of the West Belfast community back home.

“When Leo was diagnosed we had just started a new life. We had our new baby and I had just taken over the running of the Farmers Inn,” he said.

“But in January we had to pack up and go to Manchester to try and do everything we can for Leo. My business partner took over the running of the bar, we packed up our house and left it, we just had to go. He’s had a terrible time since January. They told us he would die three times, he has had chemo and a bone marrow transplant.

“One day he had 12 platelet transfusions. I don’t think we could have got through it without the support from back home. There have been fundraisers in the DC and at Aisling Day Care, people I don’t even know have been leaving donations up to the bar. People have been constantly asking about us. I just didn’t understand how much love you could have until this happened. People couldn’t do enough.”

Mark and Eva, who is from the Stewartstown Road, first realised Leo was ill when he was just two weeks old.

“He was born in January 2014 and he had a hernia and was also partially deaf in both ears,” continued Mark.

“We saw a specialist and then he had a wee swelling behind his ears, we took him to hospital and they said it was an ear infection. We knew it was something more and kept pushing and eventually he was diagnosed with Hurlers Syndrome. It only affects one in 100,000 people so it was a massive shock. The hospital told us he wouldn’t see 10 years old but we want to keep on fighting for him.”

Since January the family have been supported by the Ronald McDonald charity that has given them free accommodation in the hospital in Manchester.

‘The support we have had here has been amazing, We couldn’t have been here without the charity who have allowed to us to live here while Leo is getting treatment,” he said.

“Without the support of the Ronald McDonald charity and people back home I don’t know how we’d get through this. We are so grateful for everything everyone has done for us.”