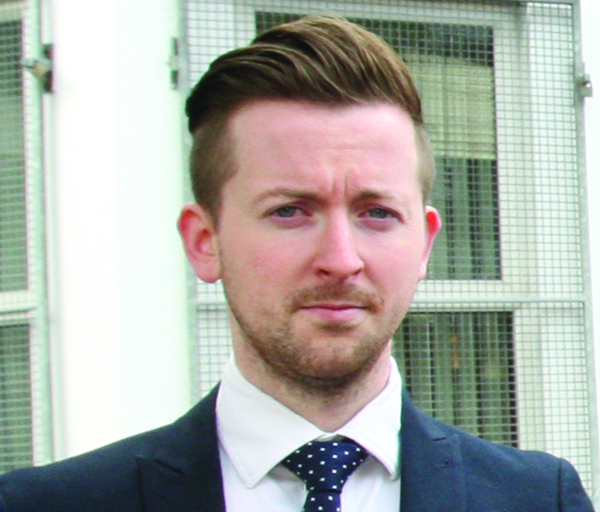 Lawyer Eoin Murphy is set for the High Court

THE son of a Newington man murdered by the UFF in a sectarian killing is to go to the High Court to try and obtain documents from the PSNI on his father’s killing.
Patrick McMahon was 23 when he was gunned down as he returned home from work in October 1993. The killer opend fire from a derelict house on Newington Street.
At least five shots were fired, one piercing his heart and killing Mr McMahon almost instantaneously. The weapon used in the murder was a .38 Smith and Wesson revolver which had been stolen during a burglary at the home of a prison officer in 1988. According to a report by the HET, the gun had been used in a number of sectarian shootings between 1990 and 1993.
The report into the killing was published following a formal complaint which found that “the investigation was not thorough, to the point of negligence” and “the investigation lacked the attention and care one would have expected from such a murder investigation”.
The family are now pursuing a civil action against the Chief Constable of the PSNI for negligence and misfeasance in public office but have been unable to retrieve crucial documents necessary to proceed with the action.
Eoin Murphy of Ó Muirigh Solicitors said they were now going to the High Court to retrive the documents.
“The HET and Police Ombudsman have identified clear failings in the original RUC investigation into this matter,” he said.
“On foot of these critical findings made by the Police Ombudsman the family initiated civil proceedings against the Chief Constable of the PSNI.
“The PSNI to date have failed to meet their obligations under the Rules of the Court of Judicature to provide our client with all relevant documentation which they hold relating to the murder of Mr McMahon.
“It is regrettable that this matter can only be resolved through the intervention of the High Court.”