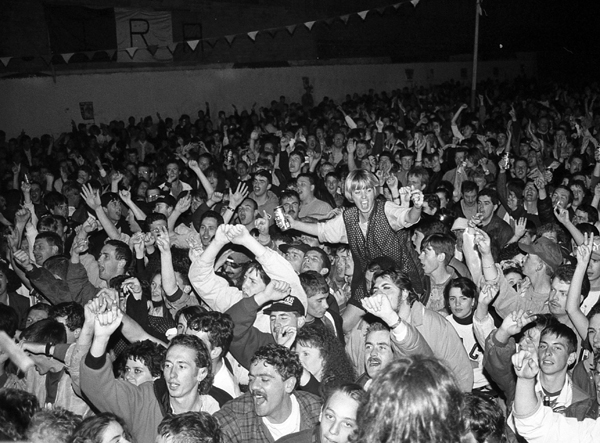 FLASHBACK: During the 1990s the highlight for many festival-goers during Féile an Phobail were the concerts in Springhill

Renowned as one of the most dynamic and unique community festivals in Europe, Féile an Phobail, is the subject of an ambitious and groundbreaking new research project based in Queen’s University Belfast. As Féile prepares to celebrate its thirtieth year in 2017, the research team aim to chart the extraordinary history of West Belfast’s innovative grassroots festival.

Through engaging the Féile community, including its founders, activists and contributors, the project has a number of outputs planned, such as an online visual archive, an audio oral history archive, a bespoke exhibition – the first of which opened this week as part of Féile ’16 – and a comprehensive book compiling the history of the Féile.

As a bottom-up community initiative, very much rooted in the politico-military conflict in war-torn West Belfast, the contemporary Féile emerged directly out of the violent events of one particular year – the spring of 1988. Whilst there had always been a history and culture of organising local community festivals since the internment years of the early 1970s, where working-class neighbourhoods living under military occupation would celebrate resilience and build a sense of community resistance against often overwhelming odds, these hadn’t been maintained under a cohesive or structured umbrella.

In March 1988, however, three IRA members, who were killed by the SAS in Gibraltar, had their funerals attacked by a loyalist gunman, killing three mourners. When the funeral of one of these mourners was disrupted by a car containing two armed undercover soldiers, both men were subsequently dragged from the vehicle and killed. Under the gaze of the world’s media, the West Belfast community came under sustained criticism in local, national and international media coverage. According to former Féile an Phobail Chairperson, Danny Morrison: “After this incident the people of West Belfast were demonised as ‘savages’ by the establishment and the media. A secretary of state, Peter Brooke, casually referred to us as a ‘the terrorist community’, and the DUP proposed that a wall be built around West Belfast to segregate it from the rest of the city.

“In reaction to this unparalleled negative and damaging and unfair portrayal of the community, local groups and their MP, Gerry Adams, decided to organise a festival. Its purpose was to celebrate the positive side of the community, its creativity, its energy, its passion for the arts and for sport. And it aimed at providing events and entertainment at a price that the majority of the community in an area of ‘social need’ could afford.

“The date deliberately chosen for the festival was the week around August 9, which saw street parties and concerts replace bonfires and confrontations.”

That first Féile of August 1988 opened with a relatively humble parade of floats and bands, and GAA clubs walking in their club regalia to an open-air party in Dunville Park. Local street parties that had always been organised on a parish basis, to bring people together for talent and/or sporting competitions, became co-ordinated throughout the West during a simultaneous week-long programme. Door-to-door collections were made to fund day trips to the seaside for pensioners and outings for young people.

Eventually, these formative developments became established and allowed for a creative flowering of talent and innovation that was manifested in more overt forms of political expression and communal resistance involving community theatre; mural art; political debate and discussion; social justice and human rights campaigning and grassroots community development initiatives. This blossoming was conceived through participatory, bottom-up approaches that fostered a practical can-do philosophy of self-sufficiency, self-help and community empowerment.

Having depended exclusively on voluntary fundraising and community support for the majority of its first decade in existence, Féile applications for support were often met with hostility and suspicion from statutory funders, who viewed the festival as a controversial, ‘toxic’ product of republican West Belfast.

According to Morrison: “Not only was funding withheld and minimised on spurious and often discriminatory grounds, which forced us to resort to the courts on occasion, but our offices came under bomb attack from loyalists and our staff members received death threats during our high-profile campaign for a Belfast city St Patrick’s Day parade.

“However, we now have an annual turnover of approximately £500,000 and have achieved international recognition while maintaining solid foundations within the community. We have contributed in a major way to peace and reconciliation, have raised morale in its host community, attracted tourists to Belfast – to the overall benefit of the city and its image – and helped regenerate a social and economically depressed area.”

“We have provided a template for how many urban, particularly alienated, communities can be united, inspired and motivated, be regenerated and contribute to progress and the overall well-being of society.”

The Queen’s research project itself is funded by the Arts and Humanities Research Council and is part of a collaboration between festival organisers and academics at Queen’s. One of those working on the research project, is Dr Michael Pierse, who lectures in Irish literature at Queen’s.

“Féile is extraordinary, in terms of its capacity to develop one of the most important, dynamic and significant festivals on these islands,” he said. “The community’s capacity to respond to that situation with this inventive, resourceful, ná habair é – dean é grassroots cultural initiative is a story that needs to be told. Féile went on to become an important example of what can be achieved – not only in terms of the festival’s immediate success, but also regarding its wider implications for Irish society and working-class communities in political transition – by a committed, resilient and empowered community. In terms of how we understand festivals and the role of grassroots culture in neo-colonial conflicts worldwide, this is an important project.”

He added: “With the community’s help we aim to produce an exhibition, a book and an online Féile history archive. What’s more, any photos, memorabilia and items of interest that are scanned and uploaded to our site can be tagged and described by anyone who wants to log on and help us out. We want the community’s version of history; their participation – and an ethos of knowledge exchange – are core to this project.”

According to Feargal Mac Ionnrachtaigh, another of the researchers on the project and himself a native of West Belfast: “We have already gathered an extensive and illuminating wealth of material that covers a diverse and eclectic range of Féile-related development. We’ve gathered upwards of 45 oral history interviews which we hope to make available to the public at a later date. We opened an exhibition of what we’ve gathered to date, which is on show during this Féile 2016 public exhibitions in St Mary’s University College as part of our build-up to a larger exhibition in 2017.

“We would encourage people to contact us and take part in collating the history of the Féile, which is synonymous with the history of community development in West Belfast. Nothing is too large or small – we’re interested in posters, memorabilia, photographs and items of interest. We intend to publish our book on the festival for the 30th anniversary, so we would urge the public and local communities to help us tell your story.”

The project has held a number of events so far and researchers have been collecting material for the online archive, some of which can be viewed at www.feilebelfasthistory.com