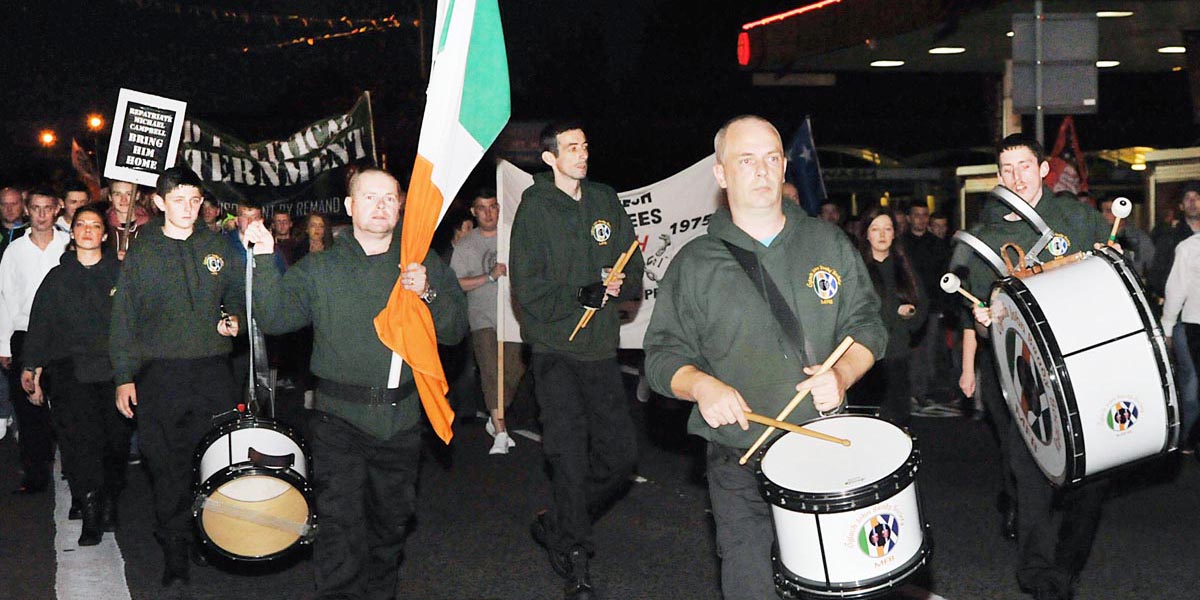 THE ORGANISERS  of last Friday’s anti-internment march are calling it a success amidst claim and counter-claim about what took place at locations in West Belfast.

Organisers claim thousands took part in the parade that made its way from North Belfast to Andersonstown to mark the anniversary of internment.

Twice the parade was stalled as police fended off loyalists protesters at Royal Avenue and the bottom of the Shankill Road. But the delays did not stop the marchers reaching their destination, albeit later than scheduled.

One of the parade’s organisers, Dee Fennell, told the Andersonstown News that the event was successful.

“At its height there were 4,500 people on the march,” he said.  “The point was to raise awareness about internment, a cross-section of the community were there to highlight this single issue and with the numbers we got in attendance, we feel it was a success.”

Dee also praised the discipline of the marchers in the face of loyalist provocation.

“At two points we were stopped because of the loyalist violence,” he said.  “At Carrick Hill people who were in the parade had to witness their own homes being attacked. In spite of that, discipline was maintained.  We all got to the final destination and heard the speeches by Davy Hyland, Francie McGuigan and Angela Nelson.”

Dee also rejected criticism of the parade by the Felons Club.  The Chairman of the Andersontown club, JJ Bradley, told the Andersonstown News that some of the actions of marchers were “hurtful”.

“It was ex-prisoner day at the Felons on Friday and we had exhibits, a family fun day and panel discussions, all part of Féile an Phobail,” said JJ. “It was an upbeat day, there was a real buzz about as people relived old jail experiences and many of these who attended stayed on in the club.

“When the anti-internment march passed the Felons, it stopped outside and a band played ‘Take It Down from the Mast Irish Traitors’ while others hurled abuse at some of our members who had gone outside with good intentions to watch the parade.  Our members who witnessed it were horrified, they couldn’t believe the vitriol and the cheering and jeering. Everyone was annoyed considering the positive day we had had beforehand.”

Dee Fennell says he has spoken to the John Brady Memorial Band – which played the song – about the criticism and their version of events was different.

“I spoke to someone from the John Brady Band. I’m told the parade had stopped and they were playing a single drumbeat,” he said.  “A drunk man was carried out of the Felons to a taxi by a man and a woman. He shouted at the band ‘Take it down from the mast, Irish traitors’ so they played it as a retort to him. They tell me that if the Felons or anyone else looks at the club’s CCTV they will see that’s exactly what happened.

“The Henry Joy Band played the Prisoners’ Anthem as they passed the Felons as a mark of respect, but they were getting abused online too for being in the parade.

“At the end of the day, I think it’s a non-issue about what was played where. The Felons was hand-delivered an invite by me to the march and emailed an invite too and they didn’t reply. People could take offence that they weren’t present when many internees and hundreds of blanketmen and hunger strikers made it. What song is played on what part of the route is not an issue. Martin Corey being in jail for three years, that is an issue.  I think the internment of people in prisons across Ireland is more of an issue than a song being played.”

We also asked Dee about claims that marchers hurled  abuse at Féile an Phobail staff as the parade passed the Falls Park.

“I didn’t see anyone abuse Féile staff,” he said. “I waved to a few friends I saw that had volunteered for Féile. If it did happen, I would condemn it as Féile is a community festival providing an outlet for the community.

“This was not the anti-Sinn Féin march people are trying to make it out to be. There were plenty of Sinn Féin people along the route, including elected representatives from Sinn Féin and the SDLP too.  This was about highlighting internment, nothing more.”