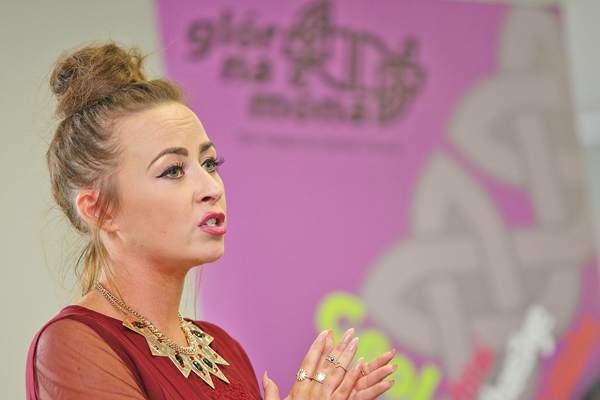 A packed programme of events is being offered from today October 1 until Sunday October 6 by the award-winning youth and community organisation who scooped last year’s Aisling Award for their contribution to the Irish language and also took home the Glór na nGael 2017 Main National Prize as the most successful community organisation in Ireland, within the Irish language sector.

“The events and projects being showcased during the Féile aim to create positive and inclusive spaces for local people that encourage them to get involved in community activism and community education, to think critically about their place in the world and ultimately to take control of their own destiny,” she said. “This same dynamic is clear in the themes of commemoration and reflection that is central to this year’s programme which celebrates some of the progressive movements and courageous grassroots efforts to build a better world.

“We pay special attention to the Civil Rights movement of the 1960’s with our annual Harry Holland lecture, as we reflect 50 years on since a new generation stood up against the brutality of the Orange State, while we also pay homage and recall Féile an Phobail on its 30th anniversary and those local activists from the Upper Springfield area who played a leading role in this tremendous explosion of talent and creativity that contradicted the British state discourse which described us as a ‘barbaric, terrorist community’. We will also be having a very special event to recognise those community stalwarts who established our Ballymurphy Gaelscoil, Bunscoil an tSléibhe Dhuibh 25 years ago.

“Our youth club are also leading the charge, along with other local youth providers, in opening the debate on a United Ireland with our very own youth referendum which will hear from a range of civil society leaders from both nationalist and unionist perspectives on their views on what the future holds for our people in the era of Brexit. We also have discussions on women’s activism, the War of Independence, community language planning, the old Springhill Festival, a Féile Voices at 30 book launch and much more.”

In addition to the political debate, reflection and heated discussion, the Glór na Móna programme of events always makes time for light-hearted fun and entertainment in the form of quality music, drama and sports which are integral to the week-long programme, combining the best of national and local talent.

Brónagh continued: “We are also delighted to provide family oriented activities and sports workshops for local young people that provide our programme with a balance that caters for a wide range of people.

Our main events this year though occur next weekend with Tony Devlin’s hilarious play on the history of Féile an Phobail, ‘A Station Once Again’ making its first appearance in the area in Gort na Móna CLG on Friday the 5th and this is followed by an amazing line-up of musicians on Saturday 6th in the O’Donnells club where local talent Jake Mac will be followed by the renowned traditional musicians Barry and Laura Kerr launching their new and highly acclaimed album, Castor Bay, before the super-group KÍLA put a finish to the Féile.

“Tickets for Gig na Carraige are available on Eventbrite: https://kila.eventbrite.com. We hope you can join us and take part in brilliant programme of events.”

See the full programme on: https://www.glornamona.com/ginearalta/ta-chlar-fheile-na-carraige-2018-beo/