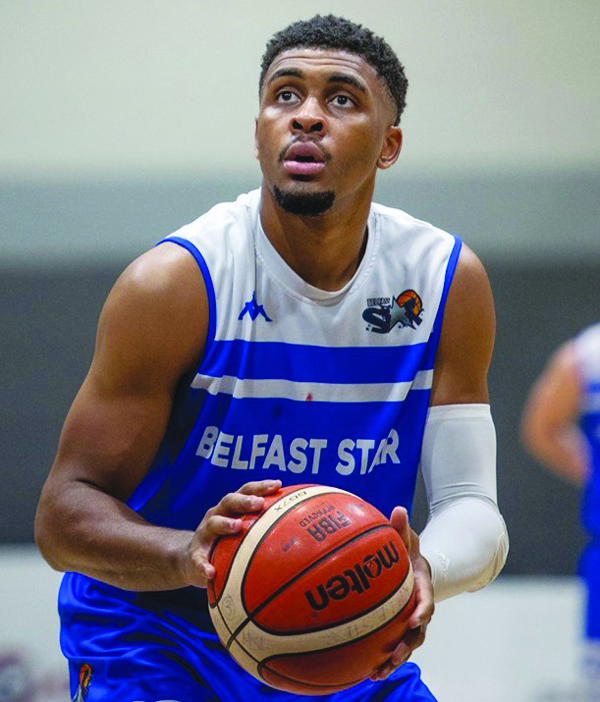 Delaney Blaylock: back to his best

BELFAST basketball lovers will get an early Christmas gift if Star can topple league champions Tralee this weekend and join the Kerry side at the top of the table.

Adrian Fulton’s charges will go into their biggest challenge of the season buoyed by their 90-79 success on the road against Dublin side Templeogue last weekend.

Templeogue have been a thorn in Star’s side for the past few years and coach Fulton was delighted to come out on top against the Dublin south-siders.

“Our games against Templeogue have been close enough in recent times but we always struggled to get the win,” he said.

“And again, this was another close game throughout with the final score not really a reflection of how close it was until the final moments.”

Indeed, it was nip and tuck across the first three quarters with the lead frequently changing hands. But whereas Star tended to fade in the final stretch against Templeogue in recent times, it was the resilience of the northerners that proved the difference this time out.

“Yes, the most satisfying aspect of the win was our toughness and the players coming up with big plays when we needed them,” Fulton added.

“Keelan Cairns and Liam Pettigrew battled and rebounded brilliantly with their big guys and Delaney Blaylock is back to the high level he was at before his injury, which is a huge boost for us.”

Blaylock ended as Star’s top scorer with 21 points to his name while there was also big scoring efforts from Cairns, CJ Fulton, Aidan Quinn and captain Conor Johnston who delivered two dagger threes and a lay-up late in the fourth to help see the visitors home to a key win.

Fulton emphasised the overall team effort on the night.

“This was a real team effort with all 10 players contributing and I am very proud of them,” he continued.

“Aidan hit three three-pointers in a row when we were in a little bit of trouble in the third quarter so when we were asked questions by a very talented Templeogue team, thankfully we had the answers.”

“I would like to take this opportunity to officially thank Ben for the superb contribution he has made to the club on and off the floor in his two months with us. He has been terrific and we wish him every success in his future career. I have no doubt he will be very successful.”

Saturday evening’s tip is at 6.30pm in La Salle.