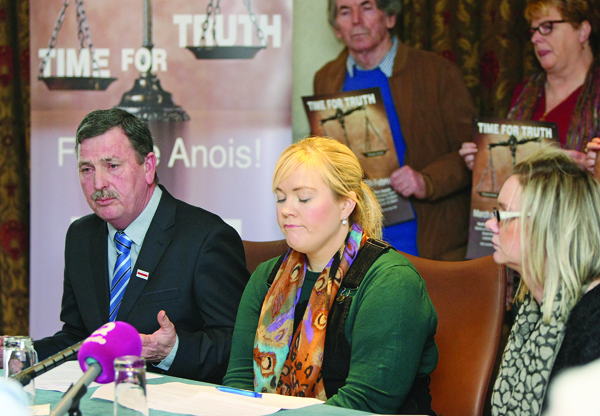 SINN Féin’s John Finucane has called for people to support the Time for Truth march which will take place in Belfast on February 25.

Mr Finucane was speaking on Saturday evening at the 45th anniversary commemoration of the British Army’s killing of six unarmed men in the New Lodge in 1973.

He said: “As a young student solicitor, I was lucky enough to help and work on the Community Inquiry into killings by the British Army of six unarmed men in the New Lodge on the night of 3rd and 4th February 1973.

“It was truly inspirational to see the international calibre of lawyers and human rights activists gather to forensically examine the actions of the British soldiers that night.

“At the conclusion of the emotional two-day inquiry, the jurists found that the state had totally failed to investigate the circumstances surrounding the deaths of the six victims and the wounding of several others.

“They also stated there had been "a clear breach of Article 2 of the European Convention on Human Rights - the right to life..." and that there was “no evidence to indicate that any of the deceased and wounded were armed at the time of their shooting or acting in a manner which might have been interpreted as a potential threat".

“Although the findings of the Community Inquiry clearly vindicated the six victims, to this day the British state has refused to admit their culpability or acknowledge the injustice that was committed.”

And the North Belfast Sinn Féin spokesperson said that the fight for justice and truth continues today.

“We are fighting to have a properly resourced and credible system implemented which examines deaths across the board for the benefit of everyone.

“We want political agreements implemented, and we want to deal with our past so that we don’t saddle new generations with the hurt and the pain that we have carried for so many years.

“Indeed we will be taking to the streets of our city on February 25th to march and demand that our right to truth is recognised.

"I urge everyone to assemble at the McGurk’s memorial North Queen St or at Divis Tower at noon on Sunday 25th.

“Our strength is in our unity, our united yet simple message that it is now Time for Truth and we will continue to remember, commemorate, campaign, fight and never give up until we achieve that.”