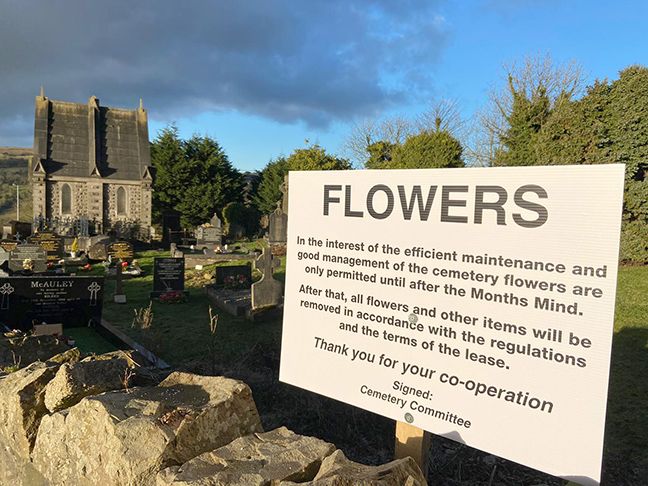 CEMETERY officials in Hannahstown say they haven’t received any complaints after requesting that flowers should be removed after a deceased person’s Month’s Mind.
A sign, right, at St Joseph’s Cemetery on Hannahstown Hill says that in “the interest of the efficient maintenance and good management of the cemetery flowers are only permitted until after the Month’s Mind”. It goes on to say that after that “flowers and other items will be removed in accordance with the regulations and the terms of the lease”.

A spokersperson for the Cemetery Committee told the Andersonstown that in early December, signs were erected throughout the cemeteries at the church reminding leaseholders of the terms of their leases including reference to flowers and ornaments placed on graves and columbarium tablets.

“This was after a number of issues were noted regarding the condition and tidiness of the cemeteries,” the spokesperson said.

“As there was very little improvement in the situation, further signs were erected in early February, again requesting removal of unauthorised items and stating that removal of any remaining items will be completed by end of February. During this period the Parish Office did not receive any communication from leaseholders stating disagreement with any planned tidy up. Indeed approaches to the Cemetery Committee have all been very positive and a number of letters have been received all welcoming the proposed plans,” the spokesperson added.

“Work has already commenced on this tidy up by removal of an unsightly pile of wreaths, flowers, candle holders, ornaments etc which had accumulated in Our Lady’s Cemetery by people who would not dispose of these items properly in the bins provided.

“The Cemetery Committee do recognise that at Christmas time and anniversaries, family members may wish to place flowers/wreaths in memory of their loved ones. This temporary relaxation of the regulations does not diminish or weaken the binding agreement between the parish and the leaseholder.

“It is expected that these items will be removed by the family after a reasonable period e.g. Christmas wreaths should be removed no later than 10th January.

“The purpose of the terms of the agreements with leaseholders is not to restrict the freedom of leaseholders but rather to ensure that our parish cemeteries and columbarium will be a testimony to our faith in the resurrection and our reverence and respect for all our dead.”