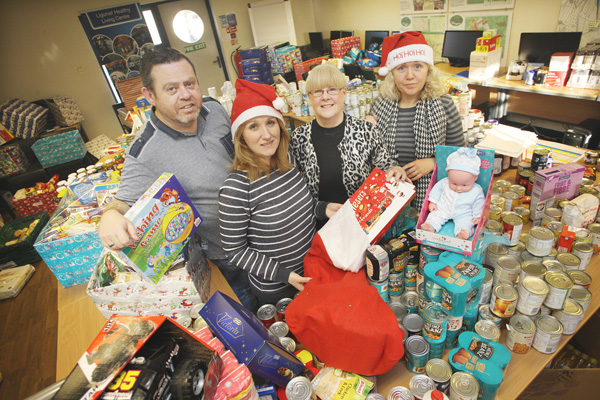 THE North Belfast Food Bank coordinator has said they are “overwhelmed” by the generosity of local people after a donations campaign netted 2.5 tonnes of goods in just one day.

The Trussell Trust set up in Tesco Yorkgate and Tesco Antrim Road recently and Alan McClure said they just can’t believe the response.

The donations come as demand for the North Circular Road-based food bank’s services have increased by 43 per cent from 2015.

“It’s overwhelming and I really want to thank everyone in North Belfast. We understand the level of poverty out there but despite that the people still gave what they could.

“We were only collecting in two Tesco stores so to receive that amount is incredible. Many customers were very thoughtful in their choice of foods as they donated festive fayre such as selection boxes, Christmas cakes, tins of biscuits and so on.”

Volunteers from local businesses donated their time to help with the effort that Alan said was greatly appreciated.

BT workers were with us as well as Nichola Mallon [SDLP MLA]. We really need to raise awareness about the poverty we are facing so anything that does that is important.”

Alan said they had experienced a 43 per cent increase in demand this Christmas and he predicted things would get worse.

“We had a wee woman come here who had been knocked off ESA (Employment and Support Allowance) – they had stopped paying her rent. That is just one example but coming into next year we expect to see much more people in the same position.”

Maria Morgan from the Wolfhill Centre said she also feared 2017 would see poverty increase. The North Belfast Advice Partnership which operates a bank from the centre has been inundated with requests for help over the festive period, with 150 hampers handed out in the area already to families and individuals in need of support. Food for 50 hampers was donated by Cliftonville FC fans after the club got involved in the campaign for donations.

“People have been incredibly generous with donations but we as an organisation are fearful that January is a very long month and people will be starting to struggle very soon after Christmas,” said Maria.

“Welfare reform is coming and we are afraid the level of poverty will increase by a huge amount.”