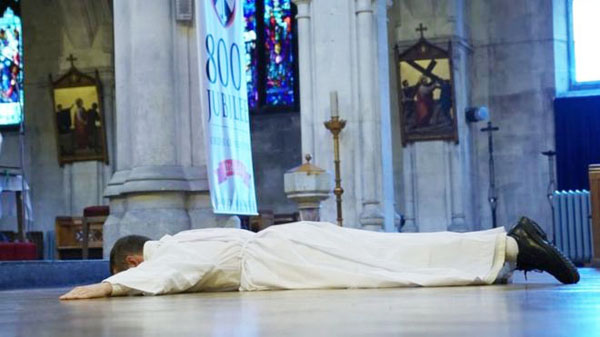 : Philip Mulryne during the ceremony in Dublin

A FORMER Manchester United player from Belfast has taken a step closer to becoming a priest.

Philip Mulryne, a former De La Salle pupil, was ordained a deacon by the Archbishop of Dublin, Diarmuid Martin, on Saturday past in a ceremony attended by friends and family.

Thirty-eight-year-old Philip, who is a member of the Dominican Order, will become a priest next year.

He began his career as a youth team player at Manchester United in 1994 and was in the FA Youth Cup winning team of 1995. He became a Northern Ireland international even before he made his first team debut at the club. His full international debut came in February 1997 against Belgium but Mulryne had to wait until the following October to make his debut for United against Ipswich in the Coca Cola Cup.

His only league appearance for United came on the last day of the 1997–98 season, in which he played the full 90 minutes against Barnsley. He then joined Norwich City in March 1999.

At the age of 31, he began training for the priesthood. Belfast football agent and local business man Gerry Carlile, who knows Philip Mulryne, said: “We played together for Lámh Dhearg when we were on the same championship team together. He always scored most of our goals and points!

“We also played football together for St Oliver Plunkett, he was always a tremendous sportsman, a real all rounder – he was great at hurling as well.”

Gerry added: “When Philly went to England to play football we maintained our friendship, as a matter of fact we almost signed a deal together for him to play for St Mirren but he changed his mind.”

Gerry said that it came as no surprise that Phillip joined the priesthood.

“Philly was always very spiritual, a real good lad with a very big heart,” he said. “He always made a point of never missing Mass, the Catholic Church are very lucky to have recruited a man of Philly’s calibre.

“Philly is one of those unique people in life who everyone likes and who no-one could ever say a bad word about. He is a gentleman.”